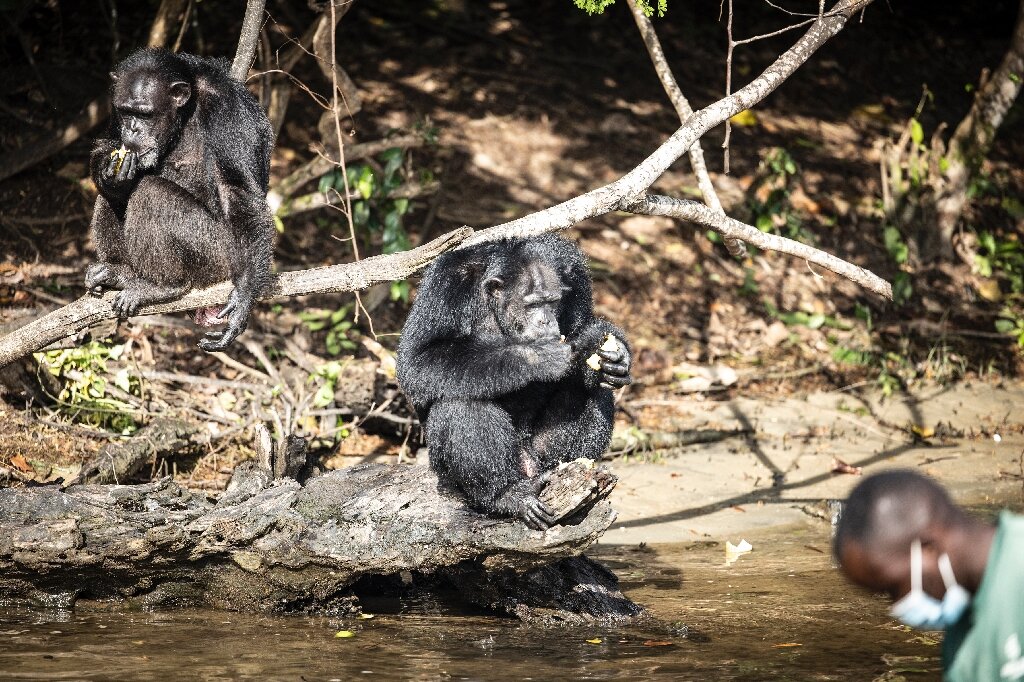 After a lifetime of trauma, Liberian laboratory chimpanzees are retiring

The beach is empty, but the sounds of rustling and chimpanzee grunts begin to fill the green undergrowth. A monkey slowly walks out onto the beach to get something to eat.

He’s a high-ranking member of his squad, Ssuna explains as more chimpanzees follow. The younger ones romp and hoot with joy when supervisors throw bananas, palm nuts and cassava at them.

But their joy in feeding belies a dark past.

The chimpanzees are the remains of a group of about 400 former subjects of a US-funded research project – and have survived decades of invasive experiments. Some of the animals underwent several hundred biopsies.

“They were traumatized,” says Ssuna, who is also director of Humane Society International (HSI), a human rights organization that now cares for the primates.

Chimpanzee testing in Liberia began in 1974 when the New York Blood Center (NYBC) funded biomedical research related to hepatitis B and other diseases at a complex on the Farmington River.

During Liberia’s devastating civil war from 1989 to 2003, the chimpanzees nearly starved to death as the land around them imploded.

The research staff in the impoverished country had to dig into their own pockets for basic supplies.

Researchers retired many of the chimpanzees to the river islands in the mid-2000s, but their ordeal continued.

For unclear reasons, NYBC cut funding in 2015 – a move that sparked global outrage – and abandoned the monkeys on tiny river islands that were unable to feed them.

Activists went on strike at NYBC headquarters in New York and Hollywood stars including Joaquin Phoenix and Ellen Page signed a petition calling on the blood bank to resume funding.

Brian Hare, a US-based primatologist who started the petition, wrote at the time, “You have effectively left these poor chimpanzees to dehydrate and starve.”

Liberia is one of the poorest countries in the world, with 44 percent of the population living on less than $1.90 a day, according to the World Bank.

Local staff at the research center kept showing up to help the chimpanzees when NYBC cut funding at a time when an Ebola epidemic was raging in Liberia. Rights groups and the US financial giant Citigroup also provided aid during the turbulent time.

Finally, under pressure, NYBC reached an agreement to share long-term care costs for the chimpanzees with the Humane Society in 2017, pledging $6 million.

NYBC didn’t respond to AFP’s questions about why it withdrew funding.

Years later, the former laboratory chimpanzees now enjoy veterinary care and two meals a day. But many still bear the scars of their dark past.

On another island, during the morning feeding session, Ssuna points to a grizzled monkey that is missing an arm. The vet says the animal was “essentially a victim of torture.”

The chimpanzee named Bullet lost a limb as an infant when poachers killed his mother and ripped him from her arms. He then ended up in the research lab.

Caretakers are trained to bond closely with the chimpanzees and to be gentle, explains Ssuna, who says certain stimuli can trigger negative memories in chimpanzees, like humans.

None of the chimpanzees can be released into the wild and are confined to the islands for life.

They have never learned to take care of themselves and there are also fears that they would spread disease if humans came into contact with them.

Feeding them is a serious operation.

According to Ssuna, the care will continue until every monkey on the islands dies.

He estimates that their lifetime care will take around 50 years. Many of the chimpanzees are around 20 years old and have a lifespan of around 60 years.

There are also a small number of babies. HSI plans to vasectomize the males to prevent further births.

“The future is very bright, as much as we’d like to release them back into the wild,” says Ssuna after feeding back on the mainland, standing next to the rusted animal cages of the old research complex.

“You are in a better place.”

Chimpanzees consider intent when judging the wrongdoing of others

This document is protected by copyright. Except for fair trade for the purpose of private study or research, no part may be reproduced without written permission. The content is for informational purposes only.