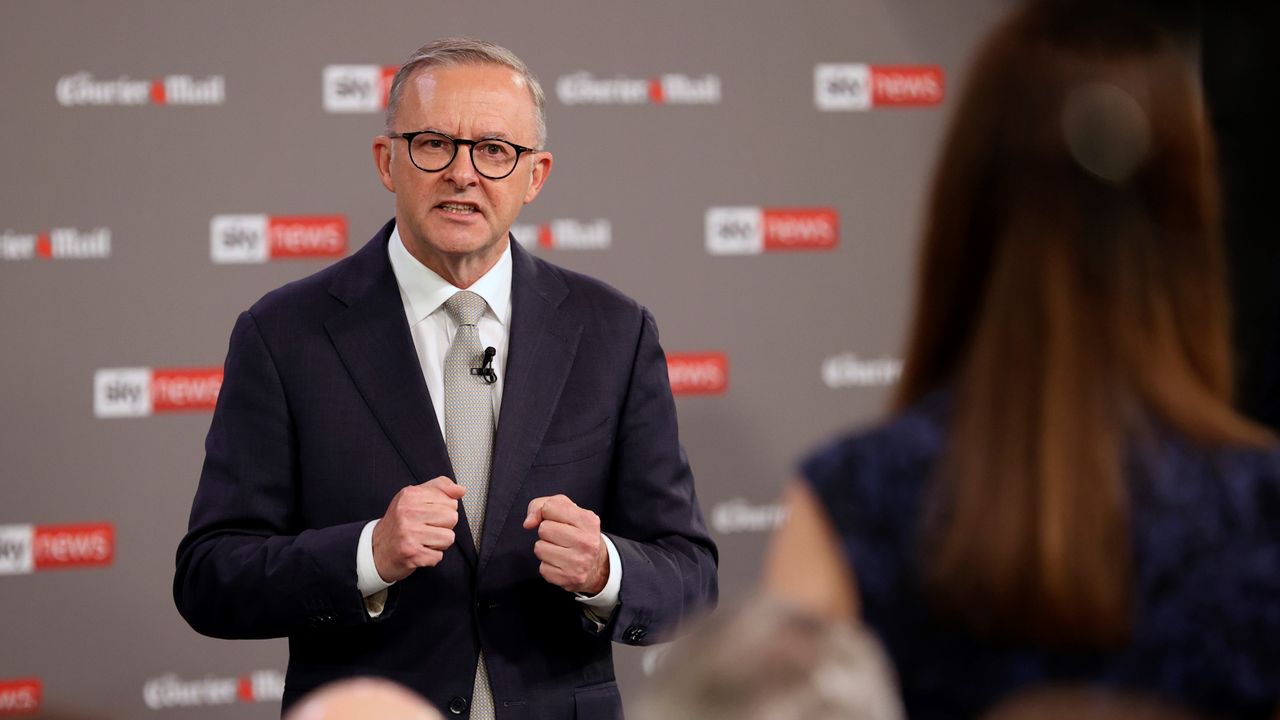 After claiming the pandemic is over, the leader of Australia’s Labor Party falls ill with COVID-19

Albanese’s contagion exposes the lies being peddled by both major parties to justify ending public health measures and putting millions of working people at risk in the interests of corporate profits.

Along with Prime Minister Scott Morrison, Albanese has portrayed the pandemic as a thing of the past, to be superseded by a mythical “economic recovery”.

During the first election debate on Wednesday evening, both of them stood on stage without a mask, in front of a similarly unprotected audience. Fittingly, the forum where Albanese was likely contagious was hosted by Murdoch’s Sky News, which has been notorious for its undermining of public health and science over the past two years.

In their contributions to the debate, Morrison and Albanese said nothing about the 6,842 needless deaths from COVID-19, more than two-thirds of which have occurred since the beginning of the year. A further 51 deaths were reported yesterday, the highest single-day number in more than a month and the 30th highest since the pandemic began. A further 46 deaths were reported today.

Across the country, 3,236 people are currently hospitalized with COVID-19. According to official figures, which massively underestimate the spread of the infection due to state and federal governments deliberately reducing testing, almost 5.6 million people in Australia have contracted the virus.

The election campaign has been utterly reckless, while large contingents of politicians, staffers and journalists travel across the country on publicity stunts, ignorant of the trail of infection they will leave in their wake.

This electoral bubble, totally disconnected from the needs and concerns of working people and the true state of the pandemic, has burst. With the infection of Albanese, reality has invaded an unreal official campaign.

Just hours before testing positive, Albanese visited an aged care facility on the south coast of New South Wales (NSW), meaning he may have exposed vulnerable residents to the deadly virus. More than 2,000 residents of aged care facilities have died from COVID-19 since the pandemic began.

According to the Australian Financial Report, at least four journalists in Albanese’s entourage had tested positive for the virus before the Labor leader. It is not known how many other senior Labor politicians have been exposed.

Despite sharing the debate stage with Albanese on Wednesday night, Morrison is continuing his campaign. The Prime Minister contracted COVID-19 early last month and is therefore exempt from close contact rules and not even required to test for the virus.

Media commentators have idiotically declared that Morrison is not at risk because of his previous case, in willful ignorance of the thousands of reinfections documented over the past four months. Not a single corporate expert has raised concerns that the prime minister and his entourage may be acting as a traveling super-spreader of the virus.

The infections hardly come as a surprise.

Health officials and government officials across the country, Labor and Liberal-National alike, are claiming the Omicron BA.2 wave has “peaked”. In fact, more than 50,000 new infections were recorded in Australia yesterday, bringing the total number of active cases to 369,910. In more than two years of the pandemic, there were just 53 days when more people became infected.

The fact that both Albanese and Morrison have been infected in recent weeks is a clear sign that community transmission is much more widespread than official figures suggest. Most of the victims belong to the working class. Unlike Albanese and Morrison, workers in factories, warehouses, hospitals and schools have no control over their surroundings and little protection if a wave of infections sweeps through their workplace.

The catastrophic pandemic is completely off the agenda at the general election because Labor and the Liberal Nationals are in total agreement. The ongoing crisis, coupled with the Albanese infection, is a direct result of the ‘let it rip’ policy passed by the National Cabinet and all states, territories and federal governments, Labor and Liberals alike.

This is basically a class issue. There is widespread support for eliminating the virus among workers who are most affected by the health, economic and social impact of the pandemic. But the official parties have made it clear that they are only concerned with business, not health advice.

Albanese presents Labor to the financial elite as the only party capable of delivering the “major reforms” demanded by big business to “increase productivity” and “build a stronger economy”. This includes lifting all public health measures that could potentially stand in the way of corporate profits.

The decision by the NSW Liberal National Government last December to scrap density limits, mask requirements, QR code check-ins and vaccination requirements has been widely criticized as a pivotal moment that massively accelerated Omicron’s devastating spread. In reality, the continued dismantling of public health measures across the country as cases rose was only possible because of close cooperation with Labour, particularly Victorian Prime Minister Daniel Andrews.

As of December 15, there were 6,233 cases of COVID-19 in NSW, just 3.4 per cent of the 185,898 active in the state yesterday. But the entire political establishment, with the eager support of the corporate media, is declaring the pandemic over.

The governments of NSW’s Victorian Labor and Liberal National states announced on Wednesday that virtually all of the few remaining public health measures against COVID-19 would be scrapped.

Masks are no longer required in NSW and Victoria except on public transport, hospitals, aged care facilities, airports and aircraft. Capacity restrictions on public transport and venues will be lifted and proof of vaccination will no longer be required to enter venues in Victoria. In NSW, vaccination requirements will be lifted for all workers except geriatric carers and the disabled.

From April 30th, unvaccinated international travelers will no longer need to quarantine upon arrival in NSW or Victoria. In NSW they must take a RAT within 24 hours of landing, while in Victoria post-arrival testing is only ‘recommended’.

The lifting of the seven-day close-contact isolation rule has been called for by big business lobbyists because up to 20 percent of workers in many industries have been unable to work due to infection or exposure to COVID-19.

In fact, since late last year, myriad industries have been granted waivers, forcing potentially contagious workers back into the workplace to sustain corporate profits. Australia’s unions have facilitated this reckless push by pushing for restrictions to be lifted while cynically calling for rapid antigen tests (RATs), masks and other measures specifically designed to keep factories open.

Demonstrating the role of unions, Health Services Union (HSU) National President Gerard Hayes last week voiced his support for the lifting of isolation rules, stating: “If you’re fully vaccinated, send back a negative test and have no symptoms, you should you can go to work.”

This is in complete contrast to the health workers allegedly represented by HSU. During a NSW-wide strike on April 7, a Newcastle health worker interrupted HSU and Labor speakers at a work freeze meeting and said: “COVID is the biggest problem here. You didn’t mention it. We work every day with COVID, many of us have been sick.”

Earlier this month, Qantas CEO Alan Joyce blamed close-contact rules for chaotic scenes and major delays at the country’s airports. The NSW and Victorian governments moved quickly to free aviation workers, putting staff and passengers at risk while doing nothing to relieve the congestion.

Australian Industry Group chief Innes Willox claimed: “The massively disrupted Easter holiday for Australians wishing to travel should send a clear signal to health officials that their rules are no longer fit for purpose.”

In other words, the bipartisan actions of the Australian governments have unleashed such a wave of mass infections that society cannot function. The solution demanded by business and now adopted by the Victoria, NSW and Queensland governments is to scrap the few remaining disease-prevention measures and pretend the pandemic is over.

The Socialist Equality Party is the only party running in the elections, demanding an immediate rejection of the murderous “let it rip” policies and the introduction of science-based measures needed to end the pandemic.

Experience has shown that this requires the intervention of the working class against all official parties.

Grassroots committees need to be formed in workplaces, schools and neighborhoods to enforce the necessary public health measures and allow workers, not management, to determine what is safe. These include the provision of quality N95 masks and other personal protective equipment, free bulk PCR testing, the closure of non-essential businesses with full compensation for workers and small business owners, and lockdowns where necessary to stop transmission.

The working class must have a political voice, which the Australian ruling class is trying to suppress with this legislation.

How often can you refinance student loans?

A prime broker for digital assets and other news