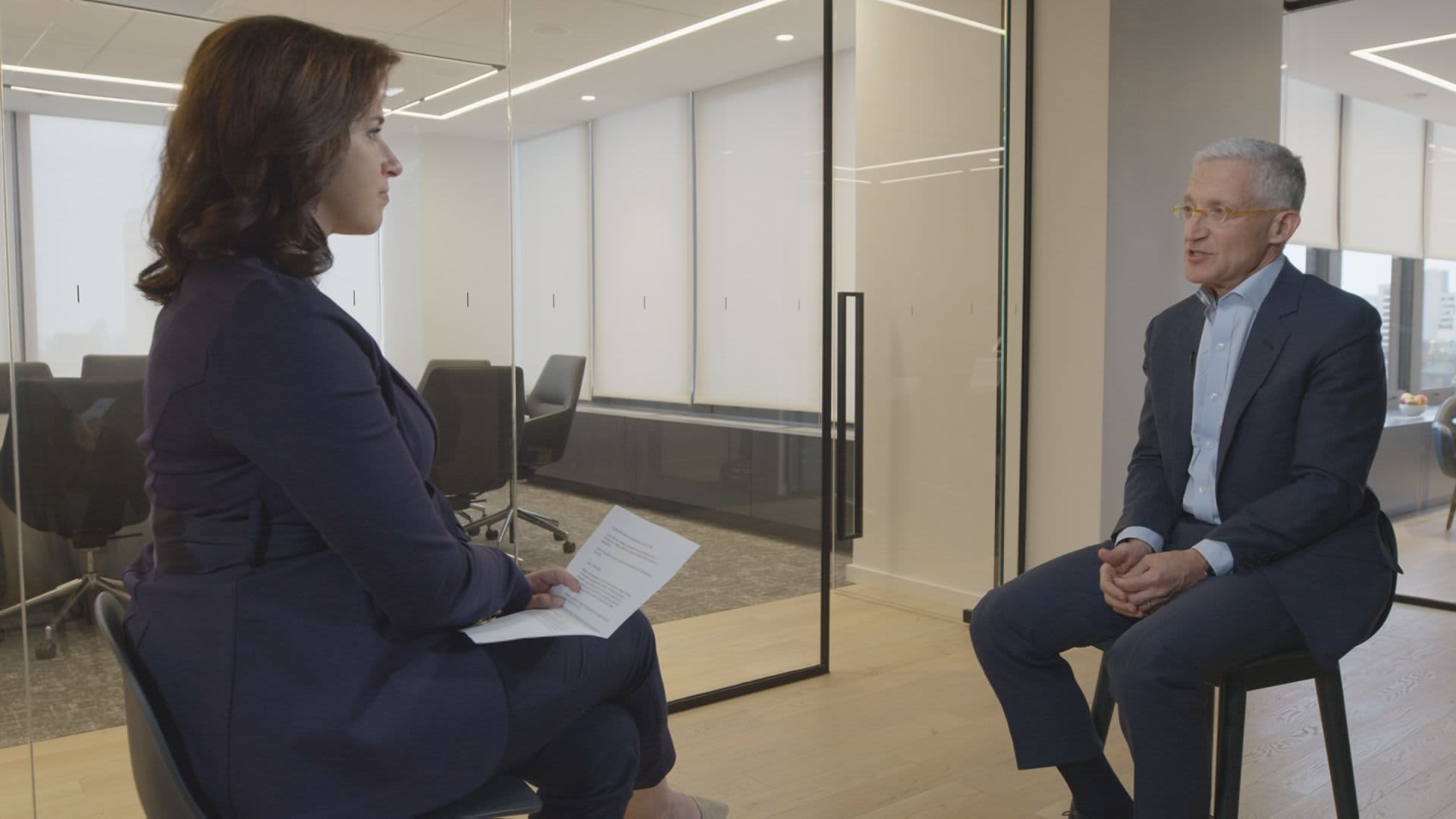 Canyon Partners’ Friedman says markets can weather a recession, and he makes a shopping list

Even if the economy contracts for two quarters — the traditional definition of a recession — Josh Friedman believes it’s strong enough to withstand a more serious slowdown. Friedman is co-founder, co-chairman and co-CEO of $26 billion lending giant Canyon Partners. He sat down with Leslie Picker to explain why he thinks markets “can tolerate a bit of stress.”

While a stronger economy means fewer opportunities for distressed investors like Friedman, he said his firm is prepared with “comprehensive buying lists of securities” in other areas such as secondaries, lending and securitized packages.

(The following has been edited for length and clarity. See above for the full video.)

Leslie Picker: I was looking back at our January interview and back then you said we were at a fork in the road. From an economic and market standpoint, this forecast seems very cautious given everything we’ve seen in the stock market sell-off, fixed income sell-off, change in monetary policy, geopolitical turmoil and more over the last six months. It’s definitely the epitome of a fork in the road. So I’m just curious how you view the current environment given what we’ve seen since our last conversation,

Josh Friedman: I think we need to start by looking at where we’re coming from. The last time I spoke to you, I believe it was the day the market fell just over 1,000 points and bounced back. And my basic comment was, well, things were just too expensive. markets fluctuate. And a confluence of recovery from COVID supply constraints and excessive stimulus from both the Treasury and the Fed caused a lot of over-speculation and froth in just about every asset class you can think of – whether it was real estate caps or not, whether it was SPACs or not traded around stocks or credit markets where you had no interest rates, no spreads and still had credit risk. So it wasn’t surprising that there was a pullback on its own, because these things are always self-correcting. There is always some kind of mean reversion. But now we’re in a slightly different place because the Fed has so clearly underestimated the more embedded inflationary aspects that exist in the economy. And that’s sort of a fork in the road that we’re at right now. Will the Fed be able to contain this quickly? Will people’s actions in response to the Fed’s comments cause this to happen on its own? Will there be enough demand destruction to contain inflation? Or maybe it will happen all by itself, even without the Fed doing what it promises.

Picker: So the fork in the road is essentially the debate that I think pretty much everyone is having right now: will there be a soft landing or a hard landing? And will the Fed be able to deliver on the potential for a soft landing? And I’m just curious how you view this from a probabilistic standpoint.

Friedman: I think in my view the Fed is sometimes given a little too much credit for everything that happens. The Fed announced all kinds of asset purchases. And yes, they bought government bonds and quantitative easing and whatnot right after COVID. But many of the measures they announced were never actually implemented. The market did everything on its own because it knew the Fed was there to protect it. And now that he knew the Fed was going to hike rates, the market started doing it on its own. People are starting to curb demand, supply is starting to be a bit more balanced again – not every market has energy markets unique issues that are somehow unique to supply and demand in the energy transition – but I sometimes think markets have a natural pull to have middle. It’s very popular when you predict a hard landing on my seat because it’s a lot more exciting and makes you a better guest on shows like this. But my general opinion is that the unemployment rate is only three and a half percent, the personal balance sheets are actually quite good, they can handle a little stress in the system. The banking system does not have the stress we saw in the global financial crisis. So, I think it’s not just the Fed that needs to pull off a little softer landing, I think the market will have natural forces that will pull us into the middle by themselves.

Picker: From the perspective of credit investors, all of this has obviously shifted the risk profile of various aspects of the corporate capital structure. Where do you currently see the greatest opportunities? Given the recent sell-off we’ve seen across many credit markets, what worries you?

Friedman: Around the time I last spoke to you, which I think was maybe late March, we had a sea change in opportunities, something like that. And since then, the high yield market has been been decimated. June was the worst single month we’ve seen in decades, except for the immediate fallout from COVID, which was so over because the Fed bailed everyone out, which they’re not doing this time.

Picker: And in June there wasn’t even a recession, it was just the market.

Friedman: Right. And so we’ve seen the stock markets devastated by 20% to 30%, depending on which market you’re looking at. We have seen the investment grade bond market destroyed, we have seen the high yield market destroyed. So bonds that were trading at par in the secondary market are suddenly trading at 80, 85, 78, 68. And the liquidity isn’t great, and high-yield funds, used to nothing but inflows, have seen a lot of outflows in a falling interest rate environment. Again, there are ups and downs, but generally speaking, the first area is just the secondary market in my opinion. High yield bonds that are down 20 points and there are a lot of them and they are not that efficient in the market today. And a lot of people who used to play in this market have left this market for a while, or at least are out of practice, because they were busy making direct loans.

The second area, I would say, is new lending, which is going to change quite dramatically. The banks were very keen to compete with many private direct lenders. And in their eagerness to compete, they got stuck with a lot of paper in their balance sheets. So first, there is a process that helps them lighten the burden of that capital at lower prices that seem quite attractive. And second, they are less aggressive. That’s how these cycles always end – they get a little too aggressive, they act like bosses, and then they have a problem. But this isn’t like 2008 when you had massively indebted balance sheets and lots of paper for the banks to rid themselves of. This is more of a short-term effect, but it will keep them on the sidelines a bit. And I think some of the private lenders that have bought relatively low-interest loans and then used them to earn a return are finding that the cost of leverage is going to be much higher. So we’re in a whole, whole different world of lending on top of secondary trading in bonds and credit.

Picker: So it’s probably a good time for you to start using this dry powder in some of those areas, which then sold quite dramatically.

Friedman: I think I mentioned last time that we were just starting to dip our toes in the water. It’s definitely accelerated. We have comprehensive purchase lists of securities. And we just wait and try to be patient. The other area where we’re seeing pretty dramatic changes is anything that’s being put into some sort of securitized package — whether it’s auto loans, personal loans, home improvement, loans, etc. — things that have been trading at 6%, 7%, 8% yield could be up to 25% return and pay for themselves very quickly today. Again, this isn’t a huge liquid market, but places where you see blocks worth $10 million, $20 million, or $30 million. And that’s an area worth focusing on right now.

Picker: Distress has been an area where I think many credit investors have been looking for opportunities in recent years. Do you think distress will bring more opportunities?

Friedman: You know, we grew up in the distressed businesses that Mitch and I started out at. Mitch was a bankruptcy attorney. We went through many cycles of suffering. It tends to be quite cyclical. There’s a difference between a distressed seller. So a mutual fund that has redemptions and needs to sell immediately, or someone who is leveraged and is being wound up, and a company that is actually going into financial distress. I think the companies are pulling their horns in. The coupon rates on the debt they issue have been pretty low lately, the covenant load is pretty loose. So actually new bankruptcies? Pretty slow at the moment. But falling prices for many quality titles? Pretty good.

I would also like to mention that the high yield index has higher credit quality today than it did ten years ago, there are more double B’s, fewer three C’s, generally higher quality credit. That doesn’t mean there’s going to be a slowdown in the economy, even if it technically qualifies as a recession, because we’ve got two quarters of contraction that I think the economy can handle well enough. But even if you have that, it doesn’t immediately mean you’re going to get a tidal wave of distress. You’ll definitely have some, which will be shaken off first by the inferior companies, which you might not care about at all costs, but we’ll see about that. At the moment we have more paper sellers than buyers and therefore prices have dropped between 15 and 20 points. We will see what happens in terms of the actual entering into restructuring and renegotiation of financial terms.

Picker: Just to follow up on something you just said. The technical definition of a recession: two consecutive quarters of contracting GDP. Do you think the economy is strong enough to support that? Does that negate the idea of ​​a recession or a traditional recession?

Friedman: You have some people who say, “Oh, consumers are already in a recession.” Well, consumers are faced with higher gas prices, they are faced with higher mortgage rates if they happen to need a new mortgage. Apartment sales are declining. So in a sense we are seeing contraction in certain parts of the economy. We regularly see inventory liquidations, but we’re not in a terrible recession. We still have an unemployment rate of less than 4%. We still have vacancies that far exceed the number of people available to fill those positions. And all I’m saying is that a modest rise in unemployment, a modest fall in available job openings, I don’t think will take the economy as far as it did in 2008.