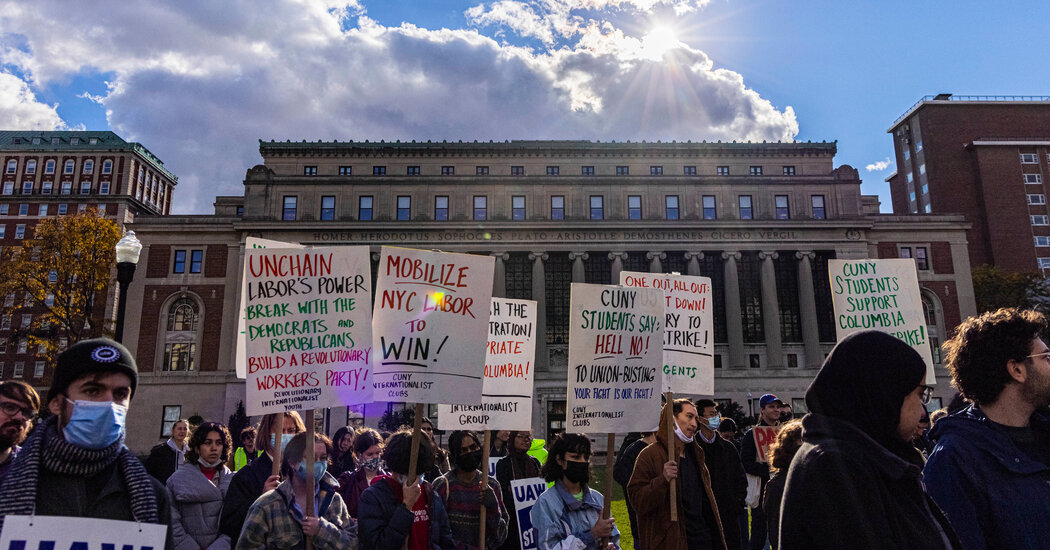 Columbia University working students on Friday gave their tentative blessings on a new contract that will increase their wages and improve their health services.

Those on both sides of the negotiations said they were pleased that the stalemate had ended.

“It’s been a really, really long road,” said Lilian Coie, 27, a PhD student in neurobiology and a member of the Columbia Student Workers Negotiating Committee, which represents approximately 3,000 undergraduate and graduate students. “Even if the agreement is not perfect, we are very satisfied with it.”

In light of the tentative agreement, union officials said that around a third of their members voted to end the strike and that more than 90 percent of voters supported it. A formal vote on the ratification of the four-year treaty is due to take place this month.

In one Explanation, Mary C. Boyce, Provost of Columbia, said, “There is no doubt that this was a challenging time for the university.”

Still, she added: “Everyone involved in collective bargaining shared the common goal of creating a stronger Colombia for those who teach and learn, research, discover and innovate, work and study here.”

“I am optimistic that Columbia will be fully back to normal academic rhythms when the new academic semester begins on January 18,” she said.

The Columbia strike was the latest of its kind at a prominent US university. Working students at New York University agreed on a contract after a spring strike. At Harvard University, a three-day strike ended in late October and a second strike was narrowly avoided the following month after a preliminary settlement was reached.

Tensions at Columbia were high at times during the negotiations. In early December, university officials sent an email to student staff stating that those who don’t return to work within a few days won’t get guaranteed jobs for the spring semester. The workers responded by blocking the campus entrances for a day.

The preliminary contract includes a 6 percent increase for employees with annual contracts and an increase in hourly wages from $ 15 to $ 21. Columbia has also agreed to pay 75 percent of the cost of dental insurance for student workers and to set up a $ 300,000 emergency fund that workers can use out of pocket for medical expenses. The fund is expected to grow in the coming years.

The agreement also enables student staff to seek arbitration by third parties following university investigations into cases of discrimination, harassment, or both. This would allow workers to use investigators or attorneys unrelated to Columbia to evaluate complaints.

The recent strike was the second such action by student workers in Columbia. The first, last spring, ended without a contract and with the resignation of all members of the collective bargaining committee.

“I think there have been a lot of people who felt that we had people off the cliff with our No campaign last spring,” said Ms. Coie. “But we’ve actually made some really, really big improvements over the last tentative agreement.”

“Student workers are the backbone of Columbia University,” said Mark Levine, president of Manhattan borough, in a statement. “And I’m relieved that the union and the university have finally reached a preliminary agreement that fairly compensates students for their teaching, research and business skills.”

Over the next three weeks, union leaders will contact as many union members as possible to ensure they understand the terms of the agreement before the ratification vote takes place.

“What our members have achieved is impressive,” says Nadeem Mansour, 32, a PhD student in the humanities and member of the collective bargaining committee, “but that’s just the beginning.”