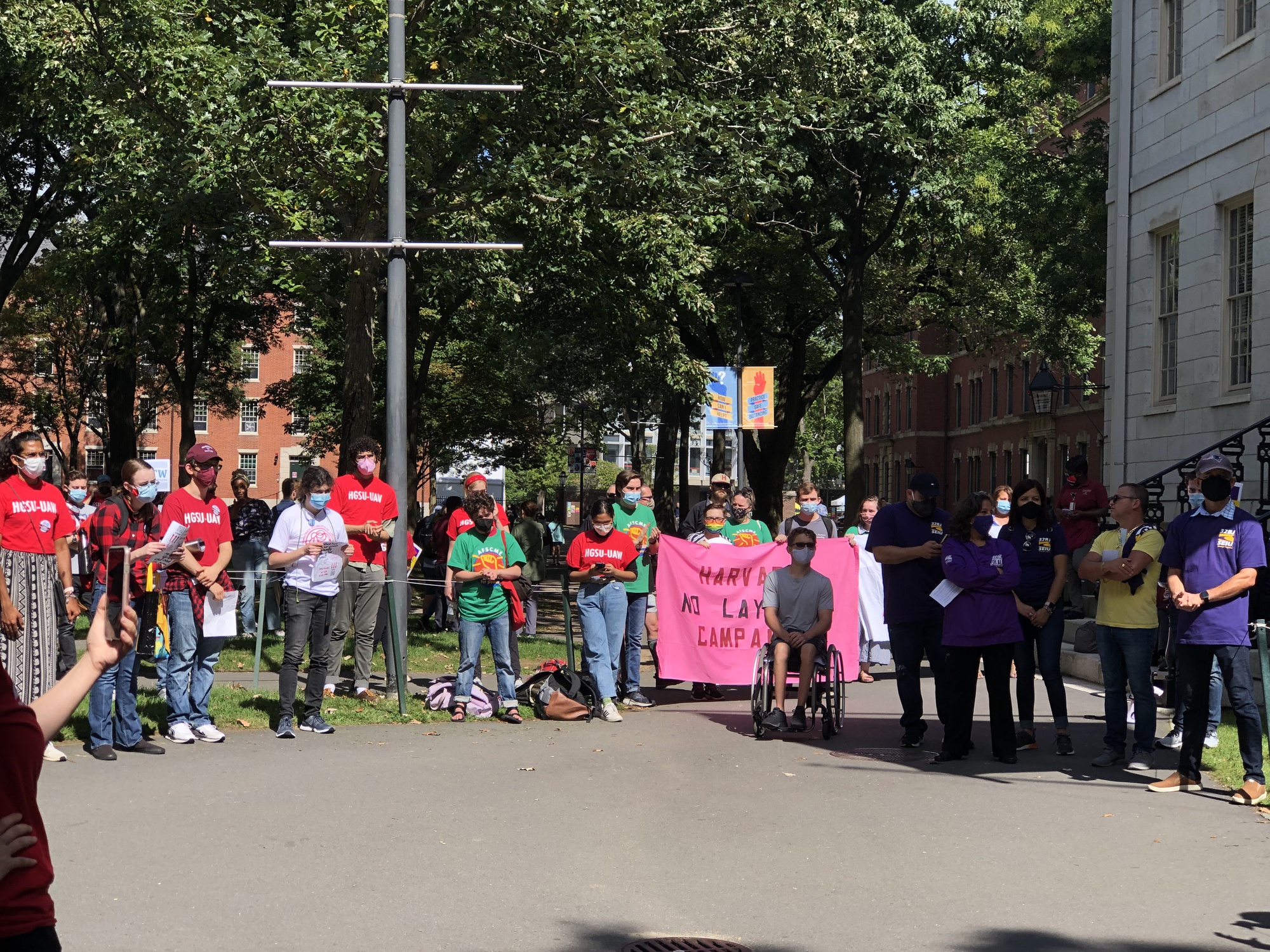 More than 120 members and supporters from five Harvard unions in various phases of contract negotiations with the university gathered in front of the John Harvard statue in Harvard Yard on Tuesday for contracts and benefits and shouted, â€œWhat do we want? Contracts! When do we want them? Now!”

Local 26 reached a preliminary agreement with the university on Friday after four months of negotiations, according to Local 26 Vice President Michael Kramer. HUCTW and HGSU-UAW have been negotiating for four and six months respectively. According to HUSPMGU President Curt E. Rheault, HUSPMGU is currently planning collective bargaining. 32BJ SEIU Vice President Roxana L. Rivera said 32BJ will go to the negotiating table in October.

“It is an agreement that protects our jobs and corresponds to the core concerns that we entered into in these negotiations,” said Kramer at the rally. â€œBut that is not done, because here, too, it is not just about the unity of our members. It is the unity of all 12,000 workers represented here. “

â€œWe paid for the office furniture from our own budget,â€ she says. â€œWe invested hundreds of additional hours of work to accomplish Harvard’s mission. HUCTW members deserve salary increases and benefits that recognize our efforts and help us move our lives forward. “

According to university spokesman Jason A. Newton, from March 2020 through April 2021, Harvard provided compensation and benefits of $ 40 million and $ 15 million for underemployed contract workers and 70 percent of the salary for laid-off workers by the end of the year extended. Individual schools and units determine the wages for released contract workers.

Rheault, the President of HUSPMGU, next spoke at the rally about the proposal to merge HUSPMGU and HUCTW. Harvard rejected merger proposals in 2016 and 2019, citing political concerns.

“They say, ‘Well why is it five years?'” Said Rheault. “That’s because we only have eighty people in our negotiating unit, and that’s why Harvard can try to take advantage of us.”

In a post-rally interview, Rheault said joining forces with HUCTW, a union that represents more than 5,000 people, would give HUSPMGU, a union of 80 workers, more bargaining power.

â€œThey’re not letting us join HUCTW, and we really don’t have a lot of purchasing power to get the wages we need,â€ he said.

“That feeling of solidarity, that feeling of workers’ organization at Harvard – that is a beacon of hope for workers across the country,” said Sobrinho-Wheeler.

Rivera, the vice president of 32BJ, next spoke about the importance of union solidarity, performing chants in English and Spanish. Dominick De Loretta, a safety officer at Harvard, shared his health concerns and reiterated the need for a contract.

Several speakers noted that, unlike other unions on campus, the current HGSU-UAW contract does not include a sexual harassment and discrimination complaint process that ends in third party arbitration. The university proposed an appeal process for certain types of non-gender discrimination in August that could result in neutral arbitration.

HGSU UAW President Brandon J. Mancilla said that inter-union talks began when Harvard unions realized that many of their problems were similar.

“We talked about negotiations and we all realized, ‘Hey, we have real fights and we need to talk to each other,'” he said.

HGSU UAW member Jen L. Cruz spoke at the negotiating table about the problems facing the student union. Cruz spoke about the union’s proposal to close the School of Public Health faculty wage gap and Harvard’s adoption of the proposal.

Tarina K. Ahuja ’24 wrote that she decided to attend the rally after finding out about it on the first year list of the city program.

“Harvard employees – HUDS employees, administrators, museum employees, graduate students, librarians – these are the people who look after us and teach us,” she wrote. “It is our duty to stand in unmistakable solidarity with them and to strengthen them in this struggle.”

– The author Cara J. Chang contributed to the reporting.