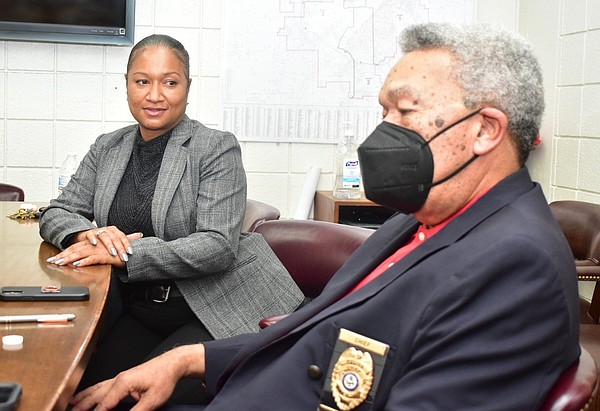 Lloyd Franklin Sr. will step down as Pine Bluff Police Chief on Wednesday, the one-year anniversary of his provisional appointment.

The Pine Bluff Mayor’s Office announced Franklin’s resignation on Friday and confirmed that Deputy Chief Denise Richardson will be named chief of the Pine Bluff Police Department on Wednesday. Richardson has served in the police force for 28 years.

According to a press release, Franklin decided to retire after “extensive consideration and further reviews of government standards required to serve as permanent boss,” a role he was appointed to on March 7. Pine Bluff Mayor Shirley Washington said at the time that the decision to drop “Interim” from Franklin’s title had been “developing for some time, particularly as we worked to get salaries.”

“Also, I looked at the fact that the department is in a much better position,” Franklin said, adding the city is much safer with increased patrols and the shooting “has gone down.”

When Franklin was named interim chief of police last summer, he said he only intended to serve in the interim role until a permanent police chief was hired and for as long as Washington would allow him.

“To put it simply, Chief Franklin has transformed the PBPD into a stronger entity that has become responsible for the delivery of public safety services,” Washington said in Friday’s news release. “This is evidenced in part by the improved solvability rate for multiple categories of crimes under his leadership. On behalf of all residents, I thank him for his willingness to serve and for keeping the residents of Pine Bluff safe.”

• Establishment of the Violent Crime Apprehension Team to focus on disrupting the movement and actions of violent offenders;

• Establishment of a ‘cold-case unit’ to focus on reviewing and closing old cases.

“I love this city and I loved this job,” Franklin said in the press release. “This city gave me a chance. It was my goal every day to repay that gratitude by keeping the streets safe. I’m proud of what we’ve accomplished since my appointment as Chief.”

Richardson, a native of Tollette, Howard County, is the second woman to serve as Pine Bluff’s police chief after Brenda Davis-Jones, who held the office from 2010 to 2013.

However, Richardson is the first female chief to break through the ranks of the Pine Bluff Police Department. According to the mayor’s office, she previously worked as a sergeant, lieutenant and captain. She has headed several departments, worked as a detective and was a liaison with other law enforcement agencies.

“The mayor’s election is one of the best and most qualified officers we’ve ever had in the police force,” Franklin said. “She has supported me from day one in all the initiatives I have launched. This city is much safer and we don’t need to bring anyone in to learn this city. She is well known throughout the facility. She knows the department inside out. She gets along with all her fellow officers.”

Richardson will be sworn in at 12:15 p.m. Wednesday in the 6th Division courtroom at 301 E. Second Ave. in Pine Bluff. District Court Judge Earnest Brown Jr. will officiate.

PFRDA nods to merger proposal of HDFC and HDFC Bank