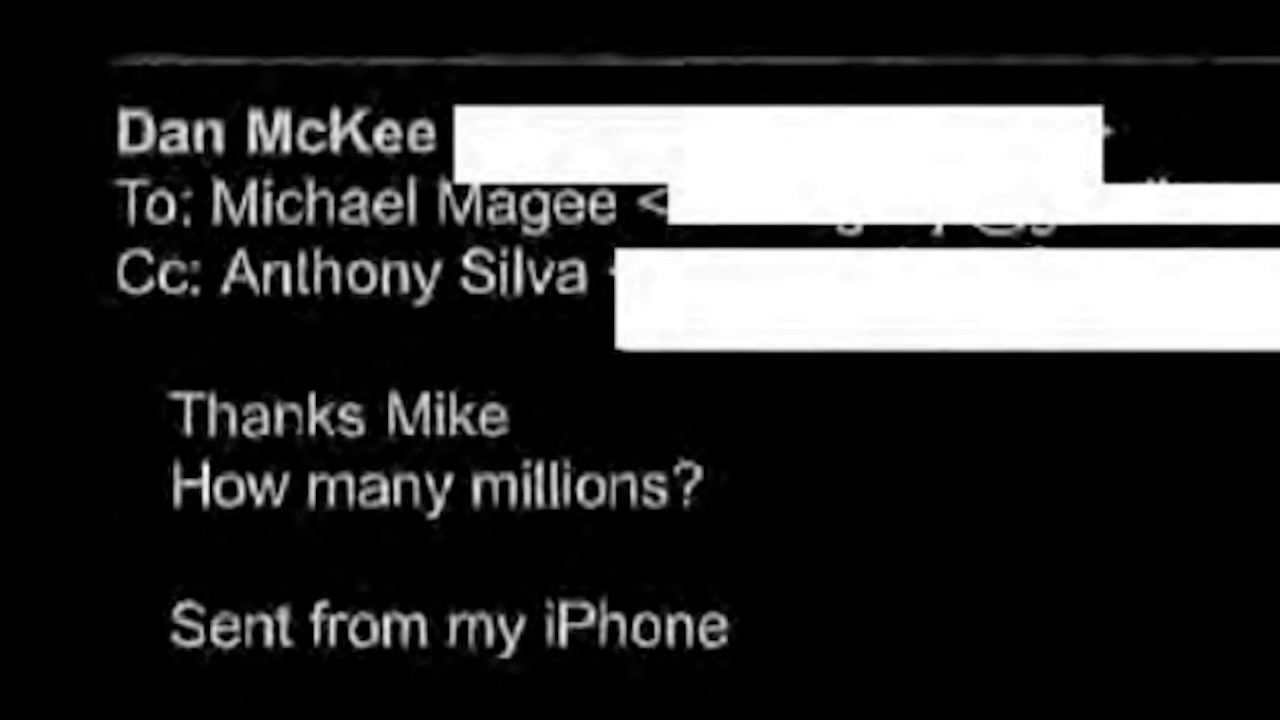 “How many millions?”: New emails show the lead to controversial contract

PROVIDENCE, RI (WPRI) — As early as October, senior officials in the McKee administration told lawmakers they were unaware of a competitive advantage that the ILO Group, a politically-affiliated consulting firm, had before winning a controversial state contract.

However, new Target 12 recordings show that in the days before Magee encouraged state officials, ILO executive partner Julia Rafal-Baer worked with a close confidante of Democratic Gov. Dan McKee, Michael Magee Jr., on the outlines of a possible state contract to consider discontinuing her company.

Magee – who was Rafal-Baer’s boss at a nonprofit at the time – also outlined how she would lead the work, according to emails obtained through a public records request.

“Julia Rafal-Baer and I worked on this scope over the weekend,” Magee wrote in an email to the then-lieutenant governor and his key aides on Feb. 28, two days before McKee was sworn in as governor.

“Julia would personally star in this,” Magee added, estimating that the consulting work would likely cost millions of dollars because “none of this comes cheap.”

“How many millions?” McKee answered the next morning.

Rafal-Baer and her partners — who had all previously worked for Magee at a nonprofit called Chiefs for Change — founded the ILO two days after McKee became governor, and went on to win the lucrative state contract. (Some of the work also went to a second company, WestEd.)

The ILO treaty was the focus of a Target 12 investigation that began last summer, which revealed a highly unusual bidding process and Magee’s close involvement in early talks.

RI Attorney General Peter Neronha’s office and the RI State Police have since opened an investigation to determine whether the deal was legal, and Neronha spokeswoman Kristy dosReis confirmed the investigation is ongoing. Legislative oversight committees have conducted their own investigations into how the deal came about.

McKee has argued that his administration has followed all of the rules associated with the state’s competitive bidding process, which is designed to help the Rhode Island government obtain fair contracts at the best possible price.

“As for the agreement and the contract, it was a competitive bidding process from the start,” McKee told reporters Sept. 15. He also said that ILO was the right company for the job.

The governor’s office confirmed last week that the ILO is no longer working for the state, effectively ending the treaty after just six months. The state has paid a first ILO bill of $763,000, but the governor’s office has refused to issue the second ILO bill as the billing is still under review.

In response to questions about the newly received Magee emails, McKee spokeswoman Alana O’Hare argued that the scope outlined by Magee in the days before McKee took office was not the same as the eventual call for proposals — or “RFP.” – which formed the basis of the mandate awarded to the ILO.

Instead, she said, the scope Magee designed was “designed as an option in case the government wanted to enter into a single-source contingency contract – a practice the previous government had used quite frequently during the pandemic.”

The statement was echoed by ILO spokesman Frank McMahon, who said Rafal-Baer had been asked to provide advice “regarding a separate group of emergency services” and that those services “were never contracted”. He argued that Rafal-Baer “never engaged in (or included in emails in) subsequent considerations as to whether those services were needed”.

“The only work the ILO has done for the state was part of a competitive, public RFP process that the state developed and in which the ILO group openly participated and won,” McMahon added.

Magee referenced an RFP as an option in emails received from Target 12, but wrote on March 1: “In terms of a strategy for executing a contract, there are two options to my knowledge: 1. An emergency contract. 2. A very fast request for quotation with a very fast processing time – e.g. B. 10 days.” (In an email to purchasing officials days later about the ILO treaty, Magee suggested a seven-day turnaround time for an RFP.)

Magee also went through the qualifications he believes should be included in the RFP process, adding that Rafal-Baer’s consulting firm would “qualify under such parameters.”

The scope of work that Magee created with Rafal-Baer also included key elements that made it into the RFP, such as to issue it.”

Magee also sent an email attachment with a “menu of services and activities” for reopening schools and addressing learning losses due to the pandemic. The document said another consulting firm that Rafal-Baer owned at the time — Hope Street Consultants — “would provide guidance on establishing community education offices within RI to support districts and their constituents.”

The community offices – which Magee McKee helped set up when he was mayor of Cumberland in the late 2000s – were an important part of the final tender and have become an important educational initiative for the new administration. McKee’s newly released budget calls for spending $15 million in federal COVID relief funds to create 11 community learning programs, including five for the state-controlled Providence School District.

Magee declined to comment on that story, citing the ongoing investigation by the attorney general.

After reviewing emails and public documents provided to Target 12, John Marion, executive director of Common Cause Rhode Island, said they had serious concerns about the fairness of the state’s procurement process.

“They have the inside track,” Marion said of ILO.

He also pointed out that the state’s purchase laws were revised decades ago following scandals – reforms may need to be reconsidered.

“There are obviously loopholes in the law that allow bidders to create the terms they are bidding on and I think we need to look at how we’re going to tighten that as a state,” he said.

DOA: “No knowledge of the emails or their content”

Internal communications linked to the ILO treaty have come under scrutiny by state lawmakers, who have raised concerns about whether the consultancy had an unfair advantage.

Those concerns were raised multiple times during the two-day fall oversight hearings, when House and Senate lawmakers spied on McKee administration officials about state procurement processes.

“It’s about basic fairness,” Senator Stephen Archambault said during a Senate Oversight Committee hearing. “You don’t meet people beforehand because you might give them an unfair advantage.”

The McKee officials who testified made it clear that Magee had some knowledge of the consulting work before it was publicly disclosed. They had attended a Zoom meeting with Magee on March 5, during which he referred to the ILO, and he later emailed them detailing how the RFP process should work.

But RI Department of Administration director Jim Thorsen insisted he did not know the ILO group knew anything about the process, as he was not privy to any conversations outside of the Zoom meeting.

“I think it’s important to point out that just because Mike Magee knows ILO doesn’t necessarily mean he consulted with them or told them about an RFP,” Thorsen said.

Target 12 shared the new emails with Thorsen’s office and asked if he and his associates were aware of the communications and whether they posed a conflict of interest.

“Besides the governor’s office statement to you, the only statement I will add on behalf of DOA is: Administrative Director James E. Thorsen and Purchasing Agent Nancy McIntyre were not aware of the emails or their contents,” department spokesman Derek Gomes wrote in one Opinion.

Also included in the emails was a two-year budget estimate that Magee prepared with Rafal-Baer, ​​stating that the work would cost about $9.1 million in the first year. When ILO bid on the contract, the company’s original estimate for the work totaled $8.8 million for a one-year contract. The amount was later reduced after WestEd — an education consultancy with years of experience working on behalf of the state — suggested doing the same work for about a tenth of the cost.

“The ILO clearly had preferential treatment,” Senate Oversight Chairman Louis DiPalma said after reading the new emails. “There are no ifs and buts. They dictated the scope and what the budget should be.”

During October’s hearings on the bill, Senator James Seveney raised concerns that talks about the labor may have taken place before the contract went out, asking Thorsen and McIntyre if it had resulted in an unfair advantage and a “conflict of interest”.

“The real concern is: how did this start?” said Seveney, D-Portsmouth. “If there are discussions between Mr. Magee and [Rafal-Baer]…why are these circumstances, either actual or potential, why is that okay?”

Eli Sherman ([email protected]) is a Target 12 investigative reporter for 12 News. connect with him on twitter and on Facebook.

Tim White ([email protected]) is the managing editor of Target 12 and senior investigative reporter at 12 News and the anchor of Newsmakers. connect with him Twitter and Facebook.

Ted Nesi contributed to this report.