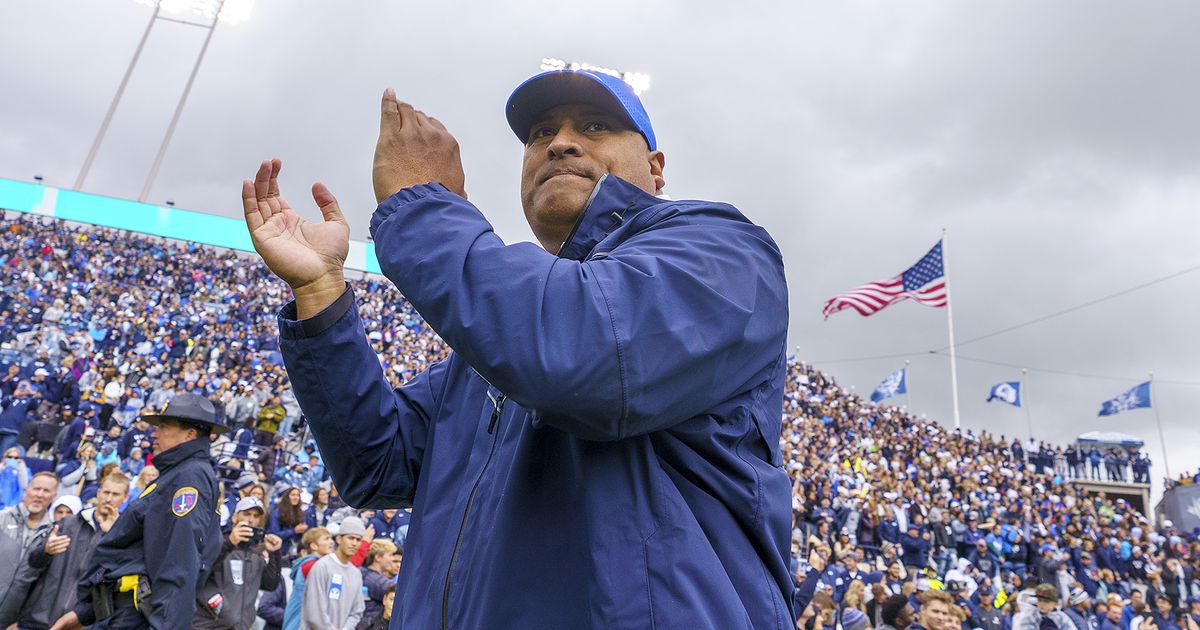 The new deal is part of a vision that will take care of assistant coaches and other support workers, said AD Tom Holmoe.

When BYU quarterback Jaren Hall and wide receiver Puka Nacua got up from the table at the end of Friday’s media session, Hall said three words that were obviously meant as a joke but hinted at the overall mood of the team.

“Kalani for the President.”

While there’s no indication that Sitake wants to be the leader of the free world, he wants to stay at BYU for years to come. He agreed to a new contract extension that will keep him at Provo through the 2027 season, and his players were delighted when they heard the news.

“We all jumped up and down after training,” said Hall. â€œSuper excited, super happy for Kalani. I think he deserves it with all the work that he has done here and for which he stands as a player and as a BYU university. “

The sports department’s announcement on Friday described the new deal as “unprecedented” – a word that sporting director Tom Holmoe and Sitake themselves doubled.

Holmoe said that when he, assistant athletics director Brian Santiago and Sitake began discussing the future of the football program, the coach wanted to speak in front of him about his surroundings. His assistant coaches, the people who work in the office, the coaches, the strength and conditioning coaches.

According to Holmoe, it was imperative that the athletics department not only look after the people around the Sitake area, but also ensure that the program had the resources it needed to get into the big from the 2023-24 season 12 to be successful.

“I think it’s unprecedented because, on the one hand, we are able to move forward with our head coach on a long-term contract,” said Holmoe. “It is also unprecedented that we Kalani and his staff made the commitment and for the rest of the program we will do the things we need to bring BYU football into this modern age.”

Holmoe added that Sitake’s assistants will be given more money, although that piece is not part of the coach’s new contract. The separate agreements for the assistant coaches will “all be finalized and renewed through January 1,” he said.

“These contracts are coming together as we speak,” said Holmoe.

Sitting at the top of the Cougars in his sixth year, Sitake currently holds a 48-28 record with one game remaining this season – the Independence Bowl against the University of Alabama in Birmingham. In the past two years alone, Sitake has led the Cougars to two consecutive seasons with over 10 wins.

Sitake signed a contract extension through the 2025 season in August. However, there has been recent speculation that he might be interested in one of the various coaching jobs that have become vacant in recent weeks – namely at the University of Washington and the University of Oregon. Last month he put down any talk that he was looking elsewhere for other jobs.

On Wednesday, a columnist for The Oregonian tweeted that Sitake was involved in discussions about the vacancy as the school’s head coach. That was just days after Holmoe appeared on BYUtv and said he was preoccupied with his own talks with Sitake about keeping the former Cougars defender.

But Sitake put an end to the rumors and speculation on Friday, which is likely to allay fans’ fears of his departure. His players didn’t seem concerned, however.

“With so much going on, we never worried in the locker room knowing that this is the season we have and that our coach is still up here on the third floor and is still coming.” To practice with us “, said Nacua. â€œWe love this guy. I wouldn’t say it was a distraction for us, but it’s been a pleasure since hearing the good news. “

That Sitake also loves its players, its employees and the BYU fan base is evident from the choice of its clothing.

“I wore three shades of blue to celebrate the moment,” said Sitake.