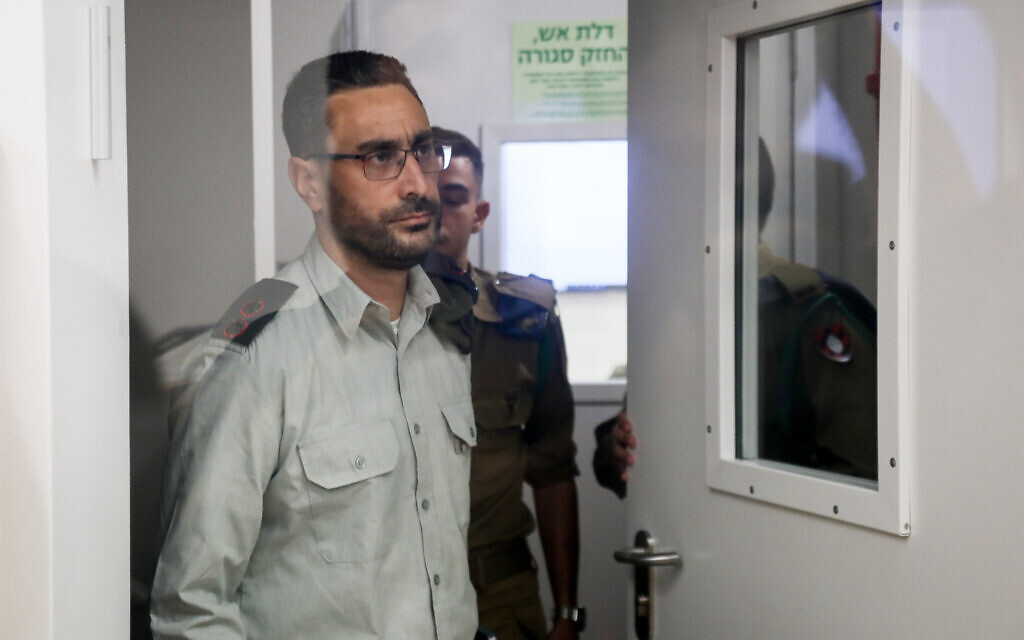 The IDF military prosecutor’s office has announced that it intends to withdraw from a plea deal with an Israel Defense Forces officer who allegedly filmed his female subordinates naked without their knowledge, after many of the victims protested.

Lt. Col. Dan Sharoni is on trial for his actions in 79 sex offense counts, which included collecting sexual images of soldiers and some civilians over a period of at least eight years.

The military informed Sharoni’s lawyers of their intention on Sunday and said another hearing on the case would be held on September 14.

“The decision is the result of the victims’ steadfast resistance,” read a statement from attorneys representing several of the victims, noting that “a system’s credibility and integrity are measured by its ability to identify and correct errors.” correct.”

The decision comes after Attorney General Yifat Tomer-Yerushalmi held a series of meetings with victims to present the terms of the potential plea.

Kan News said that while many opposed, some of the victims supported the deal, under which Sharoni would admit the charges and be sentenced to several years in prison, demoted to the rank of private and ordered to pay the 49 victims a total of NIS 250,000 in damages ($72,000).

However, the deal would also result in Sharoni’s family members benefiting from a sizable military pension despite being too young. Sharoni is currently two years away from the required age for a military pension and his sentencing trial was therefore set for April 2024, reports said.

Military pensions are generous, and since they are awarded from age 46, they give officers the opportunity to pursue a lucrative second career on top of their large pension packages.

The deal also included the option of Sharoni serving his sentence under house arrest, which would allow him to attend a rehabilitation program.

Lt. Col. Dan Sharoni, an IDF officer accused of secretly filming his soldiers, during a hearing at a military court in Tel Aviv, December 5, 2021. (Avshalom Sassoni/Flash90)

Following the announcement, Sharoni’s lawyers told the Ynet news site that they intend to appeal to the Attorney General to move the case to a civil court.

“It seems that we cannot get a fair trial in a military court,” said attorney Adi Eisner.

“Unfortunately, the military prosecutor’s office neglects rehabilitation considerations, efficient process management and also the desire to spare all complainants a testimony in court, and instead forces lengthy and complex processes on us,” she said.

According to the December indictment, Sharoni used a variety of hidden cameras, including some in phone chargers, to film soldiers under his command and often installed them in their barracks and showers. He was also accused of, for seemingly innocuous reasons, taking soldiers’ phones and looking through them to see if they had any nude or private photos on them, and then copying them onto his own device.

According to the indictment, Sharoni committed his crimes from 2013 to 2021 while serving in three different military units. In many cases, the victims were soldiers and officers with whom Sharoni had close ties.

Sharoni was fired from his position and has been in prison since his arrest in November.

You are an engaged reader

We are very pleased that you have read X Times of Israel article Last month.

That’s why we launched the Times of Israel ten years ago, to provide discerning readers like you with essential coverage of Israel and the Jewish world.

So now we have a request. Unlike other news agencies, we have not set up a paywall. However, as the journalism we do is expensive, we invite readers who have found The Times of Israel important to support our work by joining The Times of Israel Community.

Many Thanks,
David Horovitz, founding editor of the Times of Israel

Who are they ideal for?