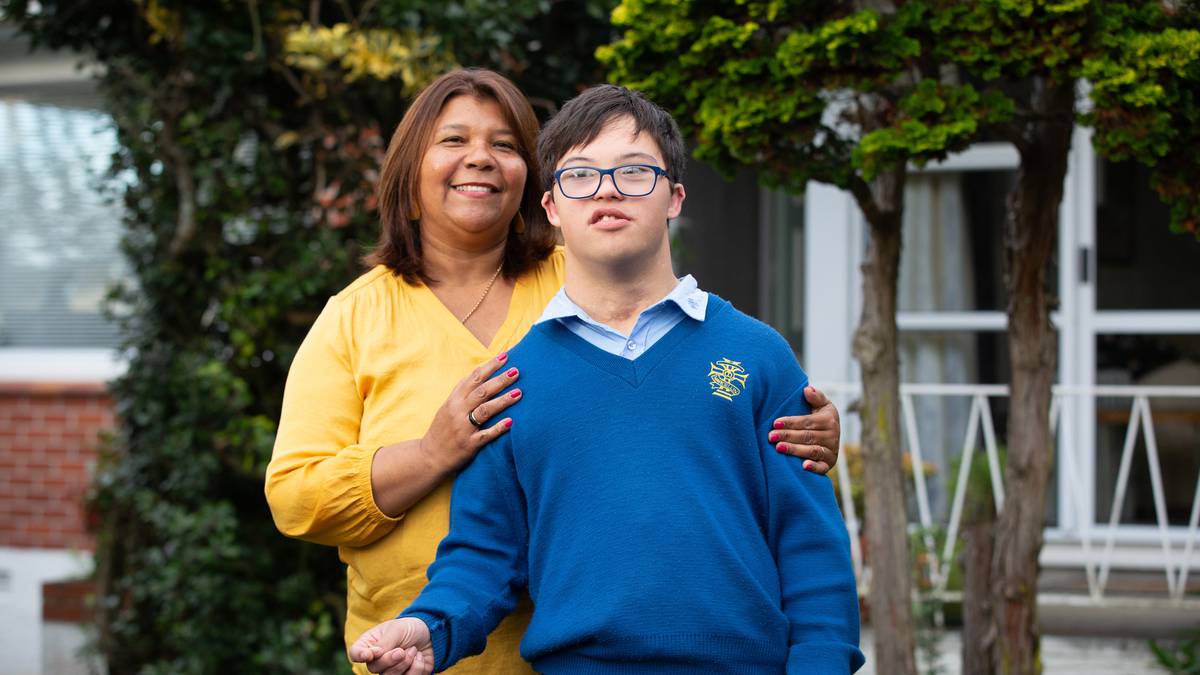 Zelita Mahoney and her son Dom, who has Down Syndrome and uses the Specialized School Transport Assistance (SESTA) service to get to Marcellin College. Photo / Sylvie Whinray

A taxi company lost a government contract to transport children with disabilities to and from school – just two weeks after taking over the service.

A fortnight follows during which students are stranded and in distress due to problems switching to the new provider, the Auckland Co-operative Taxi Society.

The Ministry of Education has promised to review the errors, although the details have not yet been decided.

The Herald has reported on children at risk who were not taken to school until 11 a.m., sometimes even taken to the wrong school. Others were dropped off unsafe or not picked up at all.

This morning the ministry wrote to central schools in Auckland saying Co-op Taxis have “agreed that they will not be able to provide the service we need”.

“We mutually agreed that they would give up this cluster.”

“I apologize wholeheartedly for the uncertainty and disturbance you have experienced,” read the letter from the Department’s school traffic group leader, James Meffan.

Sharyn Pilbrow, the acting head of the ministry’s educational infrastructure service, confirmed that Co-op has abandoned the contract and that he will go to Cross Country Rentals starting next Wednesday. A gradual transition period would end on August 17th.

“Our priority is to minimize any further stress or disruption for our SESTA students,” said Pilbrow.

The Auckland employees were in constant contact with the providers and the schools.

The ministry did not want to publish details of the contracts, citing commercial sensitivity. A question as to whether the South Auckland contract would be returned to the previous operator Go Bus was also not answered.

Co-op Taxis chairman Jacob Patel said he couldn’t say much because of Co-op’s terms of contract with the ministry, but it was a tough decision to quit the job.

“We regret that we could not keep the contract. We apologize to the parents who had difficulties not picking up their children on time.”

The company will continue to work hard to do the best it can to help the children in the other SESTA clusters, Patel said.

“Our supplier has not fulfilled his contractual obligations”

Co-op Taxis won the South and Central Auckland contracts in March and started work last Monday, the start of their third term. It already had SESTA contracts for West and East Auckland.

As of Monday lunchtime, more than 150 students – around 12 percent of the total in Auckland – had problems and the ministry was sending apologetic emails to parents and schools.

In an unusually strong public statement last week, the ministry said it was “disappointed that our SESTA supplier has failed to meet its contractual obligations”.

As per the terms of the contract, a dedicated driver should be provided to all students, and drivers should meet with schools and families to confirm pick-up details before the start of the third semester.

Co-op had given assurances to the ministry that these would be followed, but often not.

For some of the neediest children, it was two weeks before hell. A father told the Herald that his son vomited every day because of fear.

His son drove to school with the same driver every day, in a van with a special seat belt. But since Co-op took over, different drivers came at the wrong time and mostly with the wrong type of vehicle. He had taken a week off to take his son and other children to school.

The Herald has also heard firsthand about two students dropped off at the wrong school, including a boy with Autism Spectrum Disorder who first used the SESTA service last week.

His mother said because he was having trouble communicating he was able to tell the driver it was the wrong place, but couldn’t explain where to go. The boy could call his mother to pick him up; he is now too anxious to use the taxi service. His mother is still unsure who was to blame for the wrong information.

Last week, Mt. Roskill MP Michael Wood wrote a letter to Secretary of Education Chris Hipkins urging him to address the issues raised by the move as a matter of urgency. Hipkins confirmed that his office had received the letter and that he had recorded it with the Department of Education.

â€œI have prayedâ€: Parents are overjoyed that the taxi provider is changing

Mother Mel Watson tearfully told the Herald that she was “thrilled” that the contract had been returned to Cross Country Rentals and said, “This is what it might feel like to win a gold medal”.

Her daughter Paris Parker, who has Down syndrome, attends the MacLean Center at Mt. Roskill Grammar.

She was late for school every day as she was picked up by a different driver every day and taken on random routes across town to reach other students – which meant spending up to 90 minutes in the car each way.

“In all of this, Paris was fine because she’ll just get into any car. That’s the problem … She’s fine, I was worried that I was sick.

“It is a heavy burden to know off my shoulders [the service] is back in the hands of people who actually take care of these children and don’t treat them like childbirth. “

Zelita Mahoney, whose son Dom has Down syndrome, was “very, very happy” when Cross Country won the contract back.

The 15-year-old lives in Glendowie and attends Marcellin College in Royal Oak. He has a strong relationship with his previous driver and the new service is not the same, Mahoney said.

“Our new driver is a gentle man. It’s not him – it’s the system. He looked after Dom very well. But I still have the feeling that Dom has a sad face every morning – he used to be with his good friends in the van. “

Dom’s former driver had taken a job at Co-op Taxis, but Mahoney was hoping she could get back to her old cross country run.

And she wanted a public apology from both Co-op Taxis and the Department of Education.

“It has definitely cost our well-being and sanity. It wasn’t good enough. I prayed that God would do something about it.”