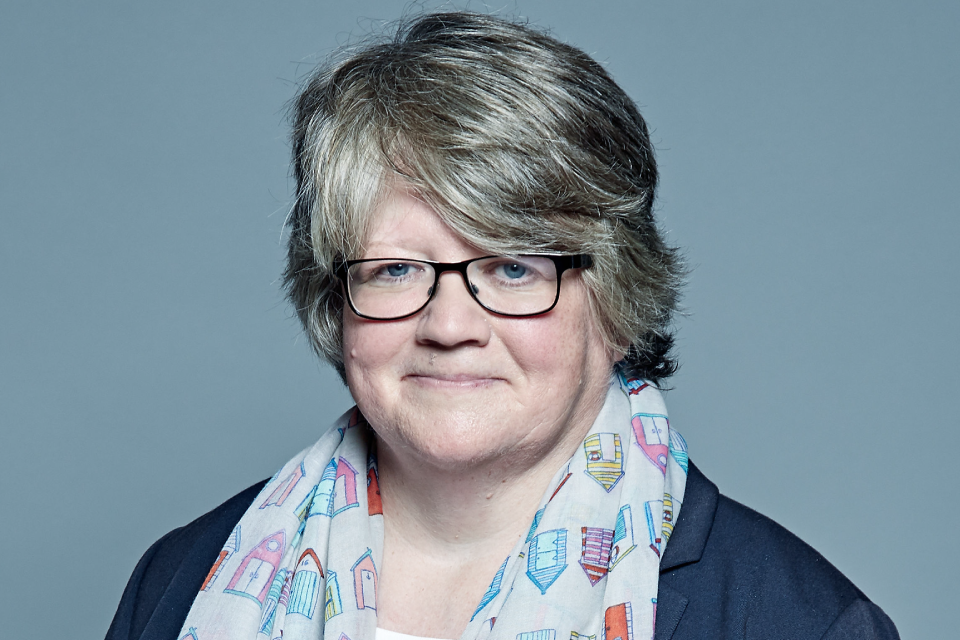 It’s great to be here at Policy Exchange today, physically but also with people on the internet.

I want to talk about how pensions can be the superpower in our race for net zero to create wealth for people and the planet. It is a race that the whole world must win together.

As a Suffolk Coastal MP and former Environment Secretary, I am all too aware that while climate change is a global challenge, the effects will be most visible in local communities.

In Suffolk we have already seen it alternate with the agricultural seasons to which we can and have adapted.

But, if left unchecked and without action, the effects of climate on our seawater and land with sea level rise would submerge parts of Suffolk and other coastal areas of Britain in the coming decades and the potential impact on agriculture, food, life and livelihood is real and tangible.

The climatic extremes we have seen around the world this year are unprecedented in scale, severity and frequency – something that will only become more common if we don’t act.

Climate change is happening and it is accelerating and so the world must work together to protect our planet.

We will completely end the use of coal power by 2024. We have developed the largest offshore wind sector in the world and secure thousands of jobs.

So there is a lot to be proud of when you look at what is already being done, and even more optimistic when you look at the commitments made about what we can do in all sectors to tackle climate change.

The COP26 in Glasgow creates the conditions for world leaders to meet the commitment made six years ago in Paris to limit the global temperature rise to well below two degrees and to target 1.5 degrees.

To keep 1.5 alive we fight on all fronts by:

and by harnessing the power of green finance to the full to invest on these and other fronts and accelerate action to help us achieve our goal of net zero in a timely manner.

The role of financial and environmental, social and governance standards is a focus of COP. As its President Alok Sharma said, “Without funding, the task before us is almost impossible”. Public finances are important and we continue to invest billions in a number of programs. But public money alone will never be enough.

It is for this reason that private funding and investment are central to the Prime Minister’s Ten Point Plan for our Green Industrial Revolution – and great efforts are being made to promote funding for climate change solutions – led by Mark Carney.

And as you saw at our International Investment Summit this week, we’re rolling out the green carpet for international investors, mobilizing the markets and the private sector – and generating nearly Â£ 10 billion in new investments and deals that support green growth, creating an estimated 30,000 will be British jobs.

But today I want to focus on part of this country’s amazing financial sector that has tremendous investment power, and that is pension funds – and the opportunities for greener pensions and how they can help us achieve net zero.

Pensions provide millions of people with a secure financial foundation for their later lives and I am proud of the work we have done to get more people to save and to make the pension system safer, simpler, more transparent and greener.

Thanks to automatic enrollment, over 10 million more people are now saving for their old-age provision – and they are saving even more, the contribution rates have risen to 8%.

We have created a new type of pension system – the collective defined contribution scheme. We are further developing our pension dashboards.

And the recent Pension Act introduced a number of new obligations for those involved in pension schemes, as well as new powers to protect retirees.

I really want to take this opportunity to thank the Minister for Pensions, Guy Opperman, who is here today, for his hard work and commitment to improving the pension sector. He really did a great job.

It’s a sector that plays a huge role in helping the UK achieve Net Zero – and leadership positions and important advances have been made across the industry:

This is a huge improvement, even 12 months ago. And it’s fantastic to see Nest, which comprises a third of the UK workforce, are putting Â£ 250million into renewable projects like solar and onshore wind in the UK and Europe.

But we have to go further in order to utilize the full potential of pensions in order to generate savings for the future that really shape our green future – and that of future generations.

If you put all of the UK occupational pension schemes together, their total assets come to nearly Â£ 2 trillion – a figure that the continued success of auto-enrollment has added to.

That makes the pension fund trustees – to whom we entrust our savings – the largest single group of institutional investors in the UK with a significant influence on the flow of capital in the economy.

Look beyond the value of UK pension systems and you are talking about tens of trillion pounds of investments in pension funds worldwide.

With the capital power to drive investments in things like green infrastructure and technology, pension systems can become a superpower in the fight against climate change.

At the same time, they are also vulnerable – they are exposed to the systemic financial risk inherent in our transition to a net-zero economy.

That is why we supported pension funds in mobilizing them so that they are better protected against climate change and can make their contribution to combating climate change.

We know that it is important to savers where their retirement savings are invested. A survey found that 70% of pension system members are interested in responsible investments that can make a positive contribution to the planet.

Not only do investors need to be encouraged to act, they also need to be informed. For this reason, we support the members of the program with the right information so that they can get a better and more informed view of how environmentally friendly the climate certificates of their program really are.

This month we are the first country in the world to require trustees by law to assess and disclose the financial risks of climate change in their portfolios.

This is in line with the recommendations of the Taskforce on Climate-related Financial Disclosures – or TCFD – established in 2015 to improve and strengthen reporting on climate-related financial information.

For the first time ever, trustees will be held publicly accountable – by placing climate risks and opportunities at the center of their governance and decision-making processes. And – most importantly – through the obligation to publish. This gives members the information they need to ask, question, and share their views.

We had previously announced that we would be discussing another key indicator: the adjustment to the Paris Agreement. And just last week, TCFD released updated guidelines recommending financial institutions to describe the extent to which their assets are in compliance with the Paris Agreement. Since the ink is still drying on this recommendation, the first thing I can do is to announce another climate for British pensions.

Today we set out how we expect pension systems to measure and report on how their investments are in line with the Paris Agreement. As the most important climate document of our time, we are measured at 1.5 degrees.

To translate the words of the Paris Agreement into practical action, we need to embed it in every part of our lives, including our pensions. This new metric will be a powerful way to easily and conveniently communicate a system’s progress in managing its transition to Net Zero and how exposed members’ savings are to the risks associated with climate change.

Along with our proposed introduction of new standards for companies to report on their environmental impact, we are putting sustainability at the center of investment decisions that will boost the economy, protect the planet and support our transition to Net Zero.

I understand that this is another request to the Trustees, following a busy period of extensive reform and change, and I want to thank them for showing great leadership and working constructively to make pensions safer, better and better to make it greener.

Let’s be clear: managing the transition is not just about regulation and ticking. Well done, managing retirement systems – that is, actively and actively managing and monitoring the system’s assets – is critical to achieving good results for hardworking retirement savers – and putting money into their retirement pots for their future and the future of the planet .

As an extremely effective tool in the industry’s response to the climate crisis and building on the recommendations of the Taskforce on Pension Scheme Voting Implementation – which DWP set up in December last year – we also advise on new guidelines for trusteeship activities.

This will help trustees monitor, engage and, if necessary, intervene on issues such as climate change that can affect the value of investments.

Pensions may not always be at the forefront of our thinking, but the changes we’ve made over the past decade have helped people save tremendously.

Our recent reforms will allow savers to see clearly how their money is being managed by trustees – and give them the tools to protect savings from the effects of climate change and make the most of the opportunities offered by the transition to a low-carbon economy .

The measures may seem technically complex, but they are transformative – they keep pension systems at the center of our response to climate change and the transition to net zero. I urge other countries to follow the UK’s lead, and I look forward to attending the COP in just over a week’s time to move this important agenda forward.

The more pension fund trustees invest in, seize and promote green opportunities, the less they reduce climate risks in their portfolios and continue to use the productive power of pension funds to drive us on the path to net zero and our greener, more sustainable future. A future that protects people and our planet and creates prosperity.

Our retirement provision can help us achieve that together.

Deandre Ayton from Suns is “disappointed” with the contract, but concentrates on the final run

The government wants pension funds to help replenish them