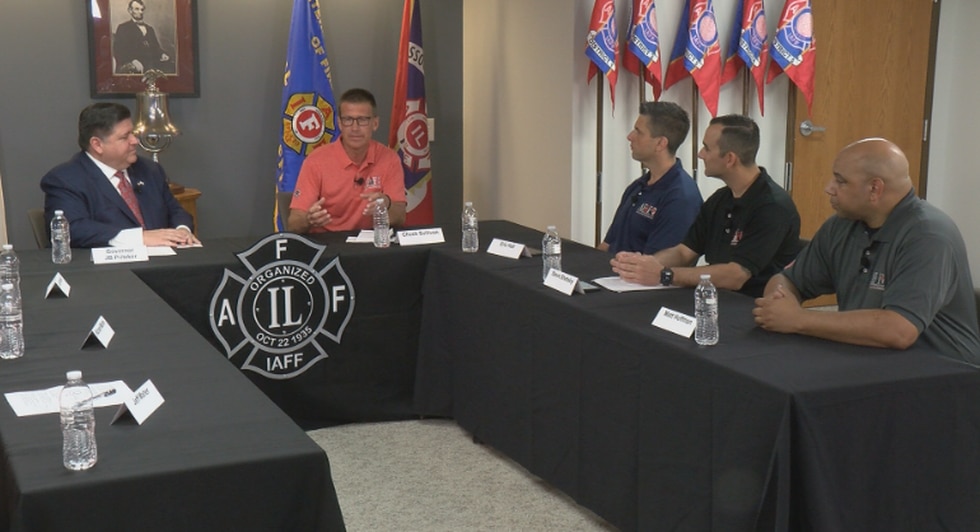 SPRINGFIELD, Ill. (WGEM) – Gov. JB Pritzker met with leaders of the Associated Fire Fighters of Illinois in Springfield on Wednesday. The group discussed recent pension consolidation and investments in the fiscal 2023 budget to help first responders.

AFFI members and the governor emphasized efforts to secure retirement benefits for firefighters. Pritzker said his government has been working with AFFI members, community leaders and lawmakers to consolidate some of the 655 local police and firefighter pension plans to improve returns on investments.

Now the state is pouring billions of dollars into a pension fund to generate good returns and lower fees for first responders.

“It’s also great for property taxpayers in local communities where they’ve seen upward pressure on property taxes because the returns in each fund haven’t been great,” Pritzker said.

The governor said lawmakers have been trying to address this issue for 75 years. AFFI President Chuck Sullivan said the organization is pleased with the $7.5 billion investment in the firefighters’ pension fund. Members also thanked Pritzker for protecting death benefits for families and children of fallen firefighters.

Fire chiefs also reflected on traumatic things they see at work and the fact that those images stay with them. Pritzker told AFFI members he wants to make more mental health and drug use treatments available to first responders. The governor said he would like to see lawmakers pass a plan during the next session for a standardized, anonymous way for first responders to request this treatment without fear of retaliation.

“There are now channels to do that. I think it’s just harder than it should be,” Pritzker said. “We don’t want it to affect your record. It should be so that you can get help and not find out later that a boss is stopping you from making progress.

Pritzker also said he will stand with first responders to support the workers’ rights change. He stressed that workers should be able to organize themselves and that laws should not be constantly changing from one administration to the next. Illinois voters will decide in November whether to include the amendment in the state constitution to protect the right to association and collective bargaining.

“From day one, Governor Pritzker has stood by firefighters and paramedics across the state,” Sullivan said. “His support for issues affecting our pension security, protection against workplace injuries and ability to collectively bargain has never faltered. His record speaks for itself and it is reassuring to know that the governor has our best interests at heart.”

Sullivan also asked Pritzker to work with lawmakers to find a new way to recruit more firefighters and paramedics. He noted that it was still a good job with a pension and decent pay. Sullivan said 1,000 people were willing to test themselves as a firefighter when he started in 1995. He stressed that the number of workers has dwindled in recent years and a task force with stakeholders could help draw more attention to the importance of First Responder.

“I think people take a lot of pride in being a firefighter or paramedic and helping people. There are kids who grow up dreaming of doing what you all do,” Pritzker said. “I think we’re going to get back to more normality over the next few years, but in the meantime, we all have to think about how to attract people to fill these open positions.”

Some AFFI members suggested the state could provide more grants to help people train to become paramedics. They found that paramedic programs take about two years to develop the right skills needed for the job. Pritzker noted that Illinois has increased MAP grant funding by 50% since taking office. He said there are special MAP grant funds for people in community colleges who might want to pursue firefighter training. But Pritzker said there are other ways to create grants to give people equal access to training programs and first responder jobs.