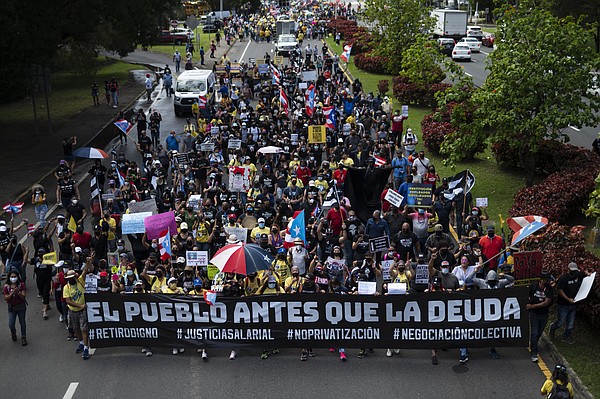 The crowd flapped and clapped as protesters held up signs that read “Fair wages now!”

It’s a call that has echoed across Puerto Rico in recent weeks as government workers and supporters took to the streets, encouraged by thousands of public school teachers who left classrooms in early February to demand raises and better pensions.

The protests have multiplied and the unrest is one of the biggest challenges for Governor Pedro Pierluisi a year into his tenure.

“People kicked the US military out of Vieques. They kicked out a governor. We can do it,” said Abner Dumey, who teaches history in the northern city of Naranjito.

Lawmakers are the only public servants who have an automatic cost-of-living increase on their salaries. Most other U.S. territory public employees haven’t had their pay rises in more than a decade — sometimes two — as the cost of living has risen and the island has suffered a protracted economic crisis and national bankruptcy after deadly hurricanes, earthquakes and the pandemic.

Electricity and water bills in Puerto Rico are almost 60% higher than the US average. Groceries are 18% more expensive than on the mainland, although health care and housing costs, among other things, are lower, according to the island’s Institute for Statistics.

Marcia Rivera, an economist and sociologist whose research focuses primarily on poverty and inequality, said government workers are struggling with rising prices while receiving the same salaries as in 2008.

Many government employees work an extra job or two to make ends meet.

For example, Carlos Javier Vázquez is a paramedic in the mountain town of Barranquitas, he also teaches emergency medicine and runs an ambulance business to support his wife and four children. It’s a life that’s exhausting and unsustainable, he said.

But since paramedics in Puerto Rico earn a base salary of $1,725 ​​a month, he said he had no choice. “It’s extremely difficult to survive from that.”

In a bid to quell the demonstrations, the governor promised teachers a monthly raise of $1,000 just days after 70% of them walked out of their classrooms in protest earlier this month. Just days later, he expanded the offer to include school principals, regional superintendents, and others.

Pierluisi’s actions only fueled anger among other government employees, with some demanding their own pay rises while others were furious at the governor’s recent comment that no one is being forced to become a firefighter or police officer.

One problem is that all of those increases Pierluisi promised are based on federal funds that expire in the coming years, and many people didn’t believe the governor when he promised to find local funds to make the increases permanent.

That promise also worried economists. Puerto Rican leaders are attempting to restructure a $70 billion national debt after decades of mismanagement, corruption and over-borrowing that forced the government to file for the largest municipal bankruptcy in US history in 2017, just months before Hurricane Maria haunted the island.

“It’s highly irresponsible,” said Antonio Fernós, a Puerto Rican economist and university professor who believes the government is unable to make the increases permanent. “It’s the 101st thing about public finance not to do.”

Fernós said one of the main things that bankrupted the government was the use of temporary funds for fixed costs.

“They certainly haven’t learned their lesson yet,” he said. “Puerto Rico is the poster child for fiscal mismanagement. This is the worst time for all wage earners.”

Rivera, the poverty researcher, agreed, saying no pay rise should be approved without a financial policy in place. She added that the governor should not settle matters by responding to shouting.

“He opened Pandora’s box,” she said. “He cannot satisfy all the demand that he has created himself.”

Pierluisi’s announcement came just weeks after the federal regulator, which oversees Puerto Rico’s finances, approved a fiscal plan that included small pay increases for teachers, firefighters and other employees. The financial situation of the government would not allow more.

The governor has said a new compensation plan will take effect next year and bring higher wages to thousands of public employees, but he also says he will not be able to increase the wages of all public employees.

“Of course I can’t please everyone,” he said on Wednesday. “That’s impossible.”

And while economists warn about the lack of funding, union leaders say the promised increases are only a good first step. They say more is needed and complain that the government is cutting pension benefits and raising the retirement age.

Wanda Ramos, a special education teacher in Caguas, said the pension she will receive in retirement will be cut to $960 from $2,400 a month. She said she’s struggling now after not getting a raise in 12 years.

“I can only buy the essentials. I never have a full fridge,” Ramos said, adding that a significant portion of her salary goes toward her daughter’s college education.

“Pay for the lights, you don’t pay for water,” she said.

Union leader José Tirado said previously firefighters could have retired at the age of 55 with up to 75% of their salary after 30 years of service. Now the minimum retirement age is 58 and they only get 33% of their salary, he said.

“The quality of life is a pity with the salaries they earn,” Tirado said.