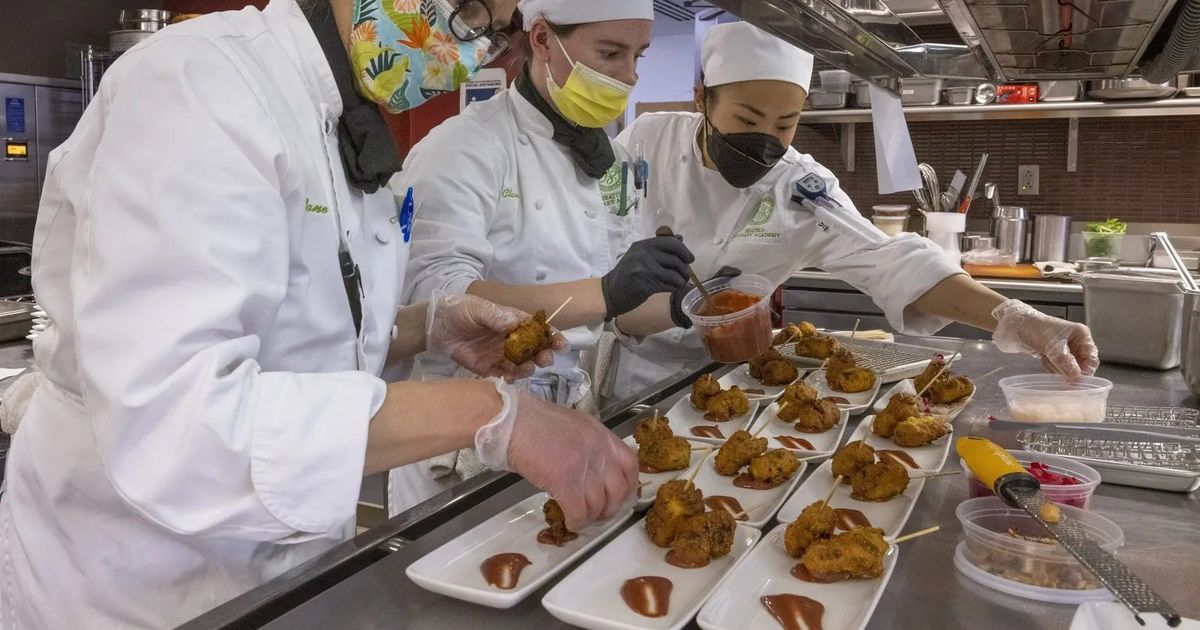 The popular Seattle colleges’ programs are safe for now, but their long-term fate remains unclear

Faced with years of massive budget crunch, Seattle college administrators told the faculty last month that four popular programs, including the well-known culinary institute, are at risk of closing.

“It just didn’t feel good,” said Scott Moy, instructor and coordinator of Seattle Central College’s apparel design and development program, one of the four career and technical programs on the chopping block.

The reaction was quick. A petition was started online to save Seattle Central’s culinary program, students turned up for a protest on Central’s campus ahead of a budget meeting, and select leaders – including representatives from the governor’s office – reached out to see what it would take to save them.

However, school leaders warn that the future remains unclear and much remains to be done to make practical programs more financially sustainable as the school system claws its way out of a massive budget deficit. The current shortage has been fueled by declining enrollment, a sudden need to focus more resources on responding to the pandemic, and what school officials say is an inadequate funding mechanism by the state legislature.

The most recent budget deficit estimate puts the school system deficit at around US$13 million. There is work to be done, and the popular programs eyed by school administrators are some of the most expensive to operate, with expensive equipment and limited course capacity needed to most effectively train students.

Seattle Colleges Chancellor Shouan Pan oversees the three community college campuses — North Seattle, South Seattle, and Seattle Central — each with its own president. For every student enrolled in the hands-on programs, it takes schools thousands of dollars a year to subsidize them, he said. The Maritime Academy, for example, costs about $21,000 per student each year.

“We get extra funding, but it’s not nearly enough to sustain the program,” Pan said.

Louise Chernin is Chair of the Board of Trustees of Seattle Colleges. She said the decline in international students started with federal policy under the Trump administration and has been made worse by COVID-19.

The drop in international student enrollment caused about $8 million in lost revenue, and “this has had a particularly strong impact on our college district,” she said.

This overall drop in enrollment also makes it difficult, Pan said, because it reduces the average class size across the system and provides less student-generated revenue per teacher.

“Every course we offer, we lose money,” he said. “We need classes to have balance.”

Chernin and Pan say the college began reducing its budget before the pandemic, but that work came to an abrupt halt as schools scramble to transition to distance learning and ensure students and staff adjust to a new remote world could adjust.

But the idea that university administrations could scrap programs that provide skilled workers to critical industries – some of which are currently facing severe staffing shortages – came as a shock and disappointment to many.

Chuck McQuinn, a retired surgeon and longtime Seattle resident, took several courses at the Wood Technology Center. He said he was sad to hear of the possible closure of the WTC as it would be a great loss for people looking to explore a new career or skill.

“It would really be a great loss to the community and to society as a whole if those opportunities were to go away,” McQuinn said, “because these young people then have fewer opportunities that we can’t afford to squander anyone’s talent as far as it goes.” affects me.”

Betty Sasenick works for La Chaîne des Rôtisseurs, an international culinary organization that awards grants and hosts cooking competitions to help educate the next generation of chefs. She said Seattle Central’s program stands out — it’s one of the few in the state with a bake and pastry line. It is also a prestigious program in the culinary world, graduating several big names in the kitchen and being rated “exemplary” by the American Culinary Federation. She says it will also play a significant role in the restaurant industry’s recovery.

“You have to make a wise and intelligent decision that’s sustainable, not just for the budget, but for the actual mode of recovery and for the city and the state,” she said.

Many people shared concerns about what the closure of the popular programs could mean for prospective students. Moy, the clothing program coordinator, said it would be a big loss for those who need better access to quality job training opportunities that are more affordable and don’t last as long as four-year programs.

The limited time frame in which people could contribute also caused a lot of concern. When Sasenick and Moy learned of the proposed closures, it appeared as if official approval to recommend the school system halt the programs was imminent.

Pan says nothing was intentionally kept secret, but he and Chernin both agree that she and other school officials could have — and should — have done more to convey the magnitude of the situation more transparently and sooner.

“We need to be more transparent when we have issues, and we need to be less general and more specific,” Chernin said.

Even if the college discontinued all four programs, however, it would not be enough to fill the current budget shortfall. Pan says colleges are working to reduce spending, in part by cutting administrative costs and providing incentives for early retirement.

For now, the effusive support and promises of emergency funding are enough to keep the programs moving forward so new students can continue to enroll in them next school year. Pan and Chernin are encouraged by the support. They hope schools can work better with industry leaders and look at ways to restructure the programs to make them more financially sustainable.

However, they point out that lawmakers also have a crucial role to play in keeping the programs open for the future.

“I hope this is a wake-up call — that our state legislature starts looking at how we fund our community college system?” she said. “It’s not just about us, it’s about our workforce, it’s about the economic health of our community.”

The Seattle Colleges Board of Trustees will meet on May 12 to discuss next year’s proposed budget and will provide final approval for the 2022-2023 budget in June.