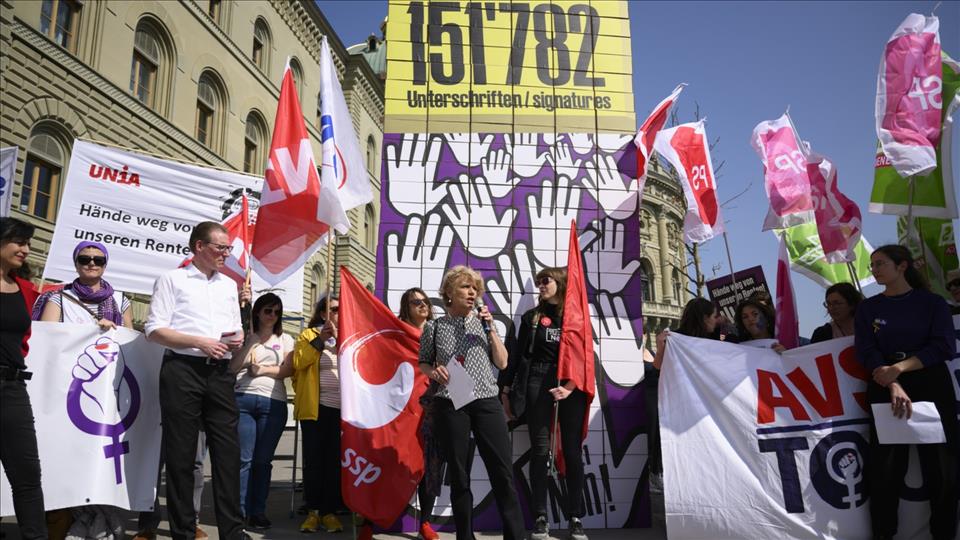 The retirement age for women is to be voted on again

The nation is voting on pension system reform in September after two previous proposals were rejected in 2004 and 2017. Raising the retirement age for women remains a stumbling block.

I like to get to know people. My interests are politics, refugee issues and national minorities. I was trained as a radio journalist. Before that, I worked for radio in the law, then at Swissinfo until 2020. Today I work as a freelance journalist.

More from this author

What is this about?

Old-age and survivors’ insurance (AHV/AVS) is the first component of the Swiss pension system. It is funded by compulsory contributions from employees and their employers. The savings bank is intended to secure a minimum income for later subsistence. In view of the increased life expectancy, this type of financing for old-age provision is no longer sustainable in the long term. The government has already proposed two reform packages. Both packages proposed raising the retirement age for women from 64 to 65, the same as for men. The first bill was rejected by the Swiss electorate in 2004, the second in 2017.

On September 25, citizens will decide on a new change in the lawExternal link. Governments want to ensure the national pension fund can stay afloat at least until 2030. The referendum is about two points of this new reform package “Retirement 21”: an increase in value added tax on supplies and services and an amendment to the federal law on old-age provision. The people must say “yes” to both if the proposed reform is to be successful.

How is this reform proposal different?

The last proposal, “Alterssicherung 2020” was rejected in September 2017 by 52.7% of those entitled to vote. It was a broader attempt at reform than this year. This involved not only the first component of the old-age security system (old-age pension), but also the second component (company pension funds). After two failed referendums, the government decided to separate the two issues. “Die Rente 21”, the package that the people are supposed to vote on this year, only affects old-age pensions.

What remains the same with this proposal is the increase in the retirement age for women from 64 to 65 years. However, while “Alterssicherung 2020” proposes long-term compensation for all pensioners, “Rente 21” limits any compensation measures to just one generation of women.

Who is affected by this new law change?

The 0.4 percentage point increase in sales tax will hit everyone as it means a slight increase in the cost of goods and services. Since contributions to old-age pensions are compulsory, some aspects of their reform may affect everyone. A flexible retirement age is proposed (between 63 and 70 years), pensioners can opt for a partial pension and contributions after the age of 65 are counted towards the amount of the pension. The whole idea is to encourage people to keep working after the official retirement age.

Most affected by this new pension reform are women, who have to work an extra year to qualify for their pension. If this latest proposal is accepted by voters, it would be phased in from 2024 onwards. For women born between 1961 and 1963, the retirement date would be gradually pushed back. The official retirement age would be 65 for those born after 1964.

The proposal includes compensatory measures for the “transitional generation”, that is, for women born between 1961 and 1969. There will be an opportunity to retire at 62 with a smaller pension reduction. There is also an allowance for women retiring at the official age or later.

What would that mean financially?

The old-age insurance closed its 2021 accounts with a profit of 2.6 billion francs ($2.7 billion) and assets of 49.7 billion francs. However, according to projections from the Federal Social Insurance Office, old-age pensions will be in deficit from 2029 onwards. If the new reform is adopted, it won’t be in the red until 2031 – and then not so bad.

Raising the retirement age for women would mean savings of CHF 1.2 billion per year after 2029. The increase in VAT would bring additional revenue of CHF 1.3 billion annually from 2024. But even the “Rente 21” reform will not be enough to cover pension financing in the longer term beyond 2030.

What do opponents say?

Any proposed VAT increase will automatically trigger a referendum as it requires a constitutional amendment. The people would have to vote on it anyway. However, a committee made up of trade unions, left-wing parties and women’s groupsExternal link decided to also launch a referendum against the amendment to the pension law. Their goal is to fight the proposal to raise the retirement age.

This coalition does not want to achieve reform at the expense of women. They argue that women receive a lower pension anyway. According to a study by the Federal Social Insurance Office, the old-age pension for women (including all three components of the old-age security system) is 37% lower than that for men. This gap is mainly due to inequalities in pay and the lower participation of women in the labor market, as they still carry out the main tasks of household and caregiving. Before the retirement age for women becomes the same as for men, the group wants this pattern of discrimination to end.

The Committee also notes that the labor market is currently opposed to hiring older workers. Raising the retirement age carries the risk of increasing the number of unemployed or on welfare. The supporters of the referendum are calling for old-age provision not to be weakened, but to be strengthened through wage increases, better pensions and alternative financing approaches.

Who supports the reform?

The government and a majority in parliament support “Retirement 21”. They warn that something urgently needs to be done to maintain pension levels through 2030 and not disadvantage future generations.

Center and right-wing parties and business lobbies are pushing for the reformExternal link. They welcome incentives to work beyond 65 and the idea of ​​flexible retirement, with the option to defer or bring forward pension payments based on personal needs. They believe that this approach will reduce the skills shortage in Switzerland. Both workers and their employers will look forward to longer periods of employment.

Supporters of “Rente 21” believe that the retirement age for women must be raised. Because women have a longer life expectancy than men and therefore need a pension longer. They are also better educated than they used to be, and most are now employed. Supporters of the legislation also say the women, who could be most affected by this change, will benefit from real compensatory measures.


Disclaimer: MENAFN provides the information “as is” without any warranty of any kind. We assume no responsibility or liability for the accuracy, content, images, videos, licenses, completeness, legality or reliability of any information contained in this article. If you have any complaints or copyright issues related to this item, please contact the above vendor.