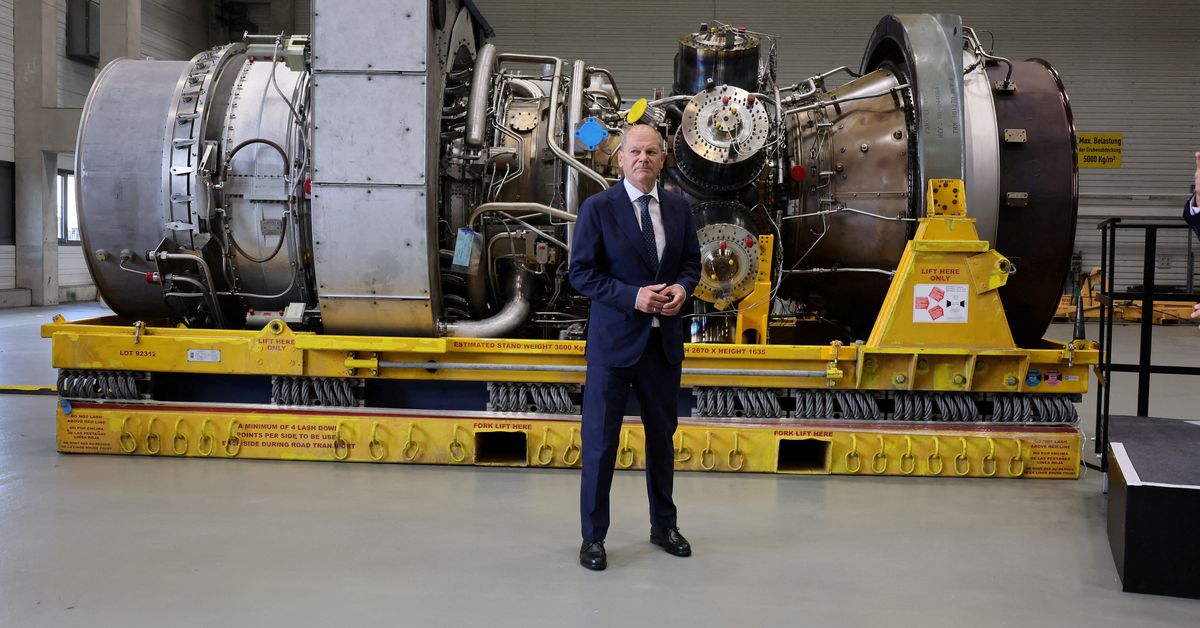 “The turbine works”: Germany’s Scholz points the finger at Russia in the energy dispute

Mülheim an der Ruhr, Germany, August 3 (Reuters) – German Chancellor Olaf Scholz said on Wednesday Russia had no reason to delay the return of a gas turbine for the Nord Stream 1 pipeline, which had been serviced in Canada but has since been stranded is in Germany in an escalating energy confrontation.

Standing next to the turbine during a factory visit to Siemens Energy (ENR1n.DE) in Mülheim an der Ruhr, Scholz said it was fully operational and could be shipped back to Russia at any time – provided Moscow was willing to take it back.

The fate of the 12-meter-long turbine was closely watched as European governments accused Russia of cutting gas supplies on flimsy pretexts in revenge on Western sanctions following February’s invasion of Ukraine.

Moscow denies this, citing problems with the turbine as the reason for the lower gas flow through Nord Stream 1, which has been reduced to 20% of capacity.

Until Tuesday evening, when the Chancellor’s visit to Siemens Energy was announced, the movements of the turbine were kept secret and its whereabouts unknown.

“The turbine is working,” Scholz said, telling reporters the purpose of his visit was to show the world that the turbine was working and that “there was nothing mystical about it.”

“It’s very clear and simple: the turbine is there and can be delivered, but someone has to say I want it.”

Even if Russia were to take back the turbine, Scholz warned that Germany could face further disruptions later and that supply contracts might not be honored.

A senior executive at Kremlin-controlled Gazprom (GAZP.MM) said last week the delivery of the turbine after maintenance was not as contracted and that it was sent to Germany without Russia’s consent. Continue reading

Standing next to Scholz, Siemens Energy boss Christian Bruch confirmed that there were ongoing talks with Gazprom, “but no agreement”.

After the Scholz government was forced to bail out energy utility Uniper (UN01.DE) when it became an early victim of the gas crisis, it is having to change newly introduced energy reforms after they ran into problems, sources told Reuters on Wednesday. Continue reading

Arbor Realty Trust, Inc. announces the price of an increased offering of $250 million of 7.50% convertible senior debentures due 2025

Boeing workers at 3 plants in the St. Louis area ratify contract and stave off strike