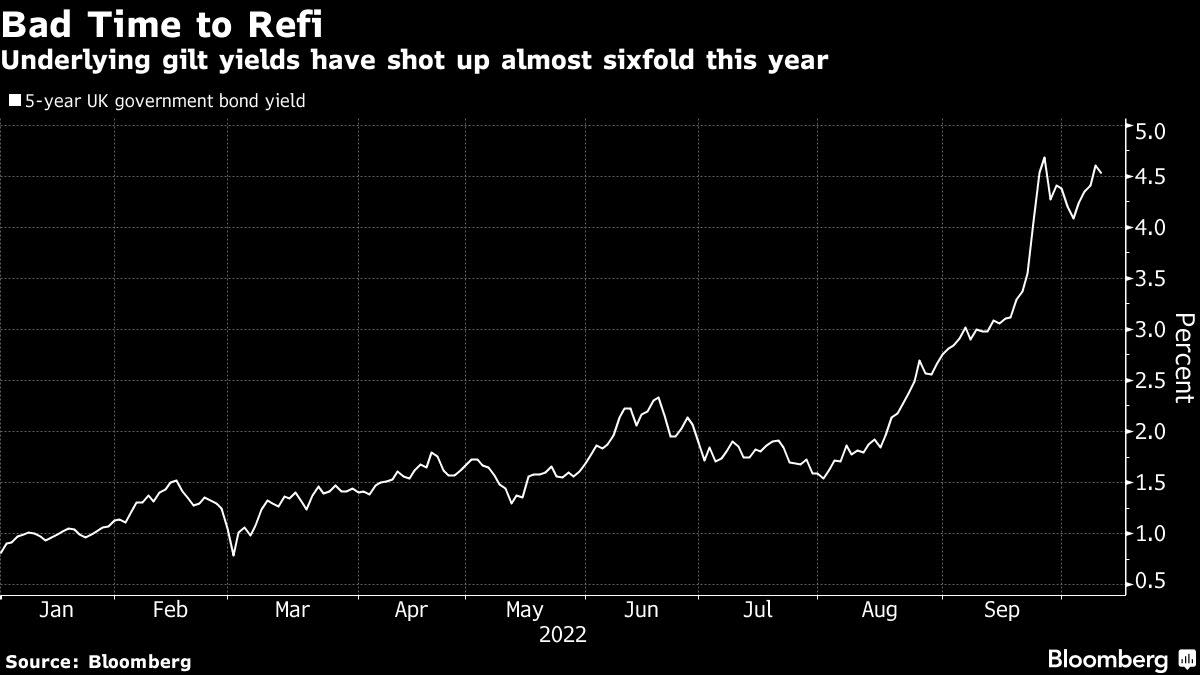 A UK lender is offering to pay bondholders higher interest rates for the debt swap rather than risk tapping the chaotic sterling market for fresh money.

With no sign of easing volatility just yet, Shawbrook Group Plc is looking to keep investors happy by switching to new debt securities, which offer a premium of 8.099 percentage points over UK Gilts, an additional 100 basis points over its existing perpetual notes. Under normal conditions, it would exercise an option to repay them in December and issue new debt on the open market.

It’s a rare move that shows just how much trouble there is in the UK. Since September 20th, days before a new budget announcement sparked a record flight for gilts, not a single company or bank has entered the sterling market for new bonds. This led to the Bank of England intervening, pension funds suffering forced sales, lenders withdrawing mortgages and the International Monetary Fund denouncing the government.

“It’s understandable that Shawbrook hasn’t made a clear decision given the extreme movements in interest rates and spreads this year, and particularly in the UK in recent weeks,” said Dillon Lancaster, portfolio manager at TwentyFour Asset Management, which holds some of the so-called Additional Tier 1 Notes from Shawbrook.

The novel approach likely reflects the challenge many corporate treasurers are currently facing. While the BOE still intervenes daily in the Gilt market, this support will end on Friday. Traders are still questioning the UK’s debt sustainability amid new government plans for tax cuts through borrowing.

The exchange shows the BC Partners-owned bank is willing to pay a hefty interest rate — most likely in the double digits — for at least five years to hold a group of investors. The interest rate on the new bonds will be fixed for the first five years and will be priced at a time when five-year gilt yields are at their highest since the global financial crisis.

“This exchange is as good as they can hope for to keep bondholders with them for the longer journey,” said Lancaster, who helps oversee £18.7 billion ($20.7 billion).

However, this also poses a challenge for the bank as its higher cost of capital could impact lending. Shawbrook’s focus on small businesses, property investors and consumers is particularly at risk as growth slows in the UK amid a cost-of-living crisis. The UK economy contracted unexpectedly in August, raising the possibility of a recession.

The exchange offer runs until Friday and is backed by investors who hold 89% of the old £125m notes, the issuer said in a filing filed on Monday. Banks issue these expensive subordinated debt to raise regulatory capital.

This isn’t the first time that banks, even national champions, have had to cough to please the holders of their riskiest debt. Over the summer, Credit Suisse Group AG replaced AT1 bonds at near double-digit coupons even as markets plummeted thanks to a surprise rate hike by the Swiss National Bank.

Shortly thereafter, Barclays Plc sold sterling notes, which came in at an initial price of over 9%. Still, the rising cost of issuing new debt will convince some lenders to skip calls, with Banco de Sabadell SA a prime suspect among analysts later this month.

Skipping the purchase option to save money wasn’t an option for Shawbrook, which wants to retain access to the market.

“We wanted to make sure we were doing the right thing for everyone involved, and while it has a slightly higher coupon, it’s a viable option in the current environment,” Murray Long, Shawbrook Bank’s head of investor relations, said in an interview .