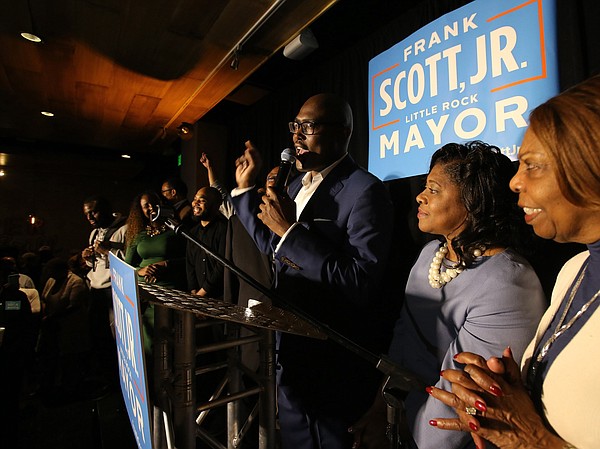 Little Rock officials have decided to work with Think Rubix to produce a new festival set for October called LITFest: A Return to the Rock.

Tristan Wilkerson, executive director of Think Rubix, made his campaign contributions as Scott was seeking his first term as mayor.

The first round of the 2018 contest to succeed then-mayor Mark Stodola was held in November, followed by a runoff in December, in which Scott defeated opponent Baker Kurrus.

During the same reporting period (July through late October 2018) that Scott’s campaign paid Think Rubix for consulting, the campaign also reported paying consulting fees to a number of other companies, including McLarty Consulting and Pine Street Strategies.

In addition to his role at Think Rubix in Washington, DC, Wilkerson is described on his LinkedIn page as a General Partner at High Street Equity Partners in Little Rock.

Wilkerson was previously the special adviser for the US Democratic Party’s Super-PAC priorities and senior policy adviser for the PICO National Network, a faith-based community organizing coalition now known as Faith in Action, his profile says.

In April, the firm announced that it had hired Charles Blake, who served as Scott’s chief of staff for much of the mayor’s tenure before resigning on January 31.

According to the city, Think Rubix submitted the only response during a qualification process that ran from Jan. 20, when the bid was sent, to Feb. 17, when the city selected Think Rubix.

The city’s April announcement said Blake was not involved in submitting Think Rubix’s response, nor in selecting the firm.

Scott has promoted LITFest as an arts and industry showcase, drawing comparisons to Riverfest, the long-running Little Rock music festival that lasted in 2018.

The city will pay Think Rubix up to $45,000, according to a copy of the event sponsorship agreement signed by Moore and Wilkerson and two other city officials. Contracts valued at less than $50,000 that go through a bidding process are not required to receive formal approval from the Little Rock Board of Directors.

Earlier this month, Little Rock announced that LITFest would be held October 7th-9th.

“Not only will this be a time for Little Rock residents to rally, this is a citywide homecoming,” Scott said in a July 5 statement. “In keeping with this theme, special emphasis will be placed on highlighting current and former Little Rock residents who are recognized as leaders in their fields to participate as performers and panelists.”

An employee of Ghidotti Communications, a firm that handles Think Rubix’s external public relations, said Wilkerson was unavailable for an interview.

In response to questions about Wilkerson’s contributions to Scott’s campaign, Ghidotti official Angela Rachels referred Friday to the public record of campaign contributions and provided a written statement from Wilkerson.

While citing the importance of investigative journalism, Wilkerson argued that “applying an uneven scrutiny lens sets a dangerous precedent that threatens the right to participate in the democratic process.”

“Participation in both our democratic process and the business marketplace are simultaneous freedoms that all Americans should have equal access to,” he said. “In particular, we should encourage historically disadvantaged communities to participate in our democratic and free marketplaces.”

Wilkerson described Think Rubix as “the state’s largest minority-owned public affairs firm” and said its work is “motivated by impact, not financial gain.”

“We would hope that the Arkansas Democrat Gazette would apply the same level of scrutiny to any person or entity that made a legal campaign contribution to any aspect of the past mayoral campaign and then later got involved in city business through a fair, transparent, and legal process than.” targeting this test unevenly among individual groups,” Wilkerson said.

In an email Friday, mayor’s spokesman Aaron Sadler wrote, “We have answered repeated questions about this city contract and will repeat: Think Rubix was the sole respondent to the call for proposals, a committee of city employees evaluated the proposal and recommended the contract, the city manager signed the contract and the city attorney declared that the contracting process was fair and ethical.”

Sadler added, “Campaign contributors are not, and should not be, barred from soliciting government business, as proper steps are in place to select the right vendor in the right way.”

YouHodler Review: Still the Best Prices and Lots of Features