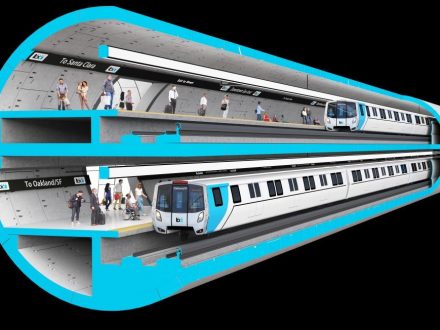 The Board of Directors of the Santa Clara Valley Transportation Authority (VTA) has given the green light to the first in a series of construction contracts for the Silicon Valley Phase II (BSVII) Bay Area Rapid Transit (BART) program.

The first package for the tunnel and track works is a $235m (£189m) progressive design-build contract. Known as Contract Package Two (CP2), it forms the largest of four packages. It includes the construction of most of the infrastructure that will enable successful fulfillment of the remaining contracts.

It will be supplied by Kiewit Shea Traylor (KST), a joint venture between Kiewit Infrastructure West, JF Shea Construction and Traylor Brothers, backed by Kiewit Engineering Group and Arup.

In 2019, VTA awarded Mott MacDonald/PGH Wong the general engineering consultant contract for the program. It then began in September 2020 with early onboarding of contractors.

CP2 will be implemented in stages. The activities in the first phase include the investigation of innovations, engineering and design, open cost estimates and the work plan. This work is expected to be completed from May 2022 to around December 2023.

Phase one will set the stage for major construction, or phase two which will include drilling the tunnel beneath downtown San Jose.

Three other contracts being considered in the future relate to the systems, stations and the Santa Clara station and maintenance yard.

VTA’s BSVII project is a 9.7 km, four station extension that will bring BART service from Berryessa/Northern San Jose through downtown San Jose to the city of Santa Clara.

It includes three stations with underground platforms at 28th Street/Little Portugal, Downtown San Jose and Diridon, and one ground-level station in Santa Clara. In addition, the project includes a train maintenance and storage facility at Newhall Yard, among other facilities.

Approximately 8 km of the 9.7 km long route will be built in a large diameter single tube tunnel, while the remainder will be in grade rails.

The VTA Board has also approved a request to review previously completed assessments comparing single and twin tube tunneling methods in a parallel course progressing with initial contract work.

Extensive construction work on the system is expected to be completed by 2028, followed by system testing and passenger operations from 2030.

It is the largest single public infrastructure project ever constructed in Santa Clara County, California, USA.