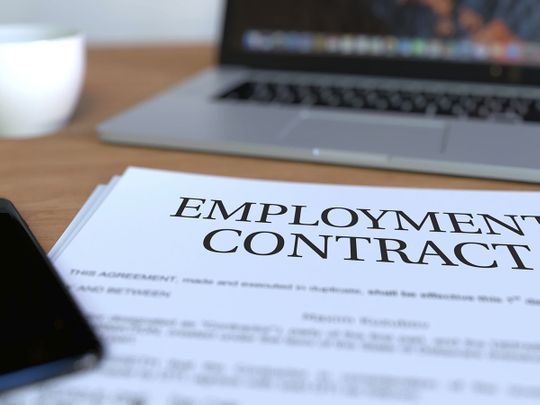 UAE Labor Law: My employment contract differs from my offer letter. What action can I take?

Dubai: If you are about to sign your employment contract after accepting a job offer, you should read the fine print carefully. If the contract contains terms that are inconsistent with your job offer letter. This would be a violation of UAE labor law.

But what if the company you want to work with gives you an employment contract that differs from the offer letter? Gulf News spoke to legal experts to find out what your rights are in such a scenario.

The contract should match the offer letter

Dubai-based lawyer Ayesha Zia of Dr. Mahmood Hussain Advocates and Legal Consultancy LLC said that the letter of offer issued by a company and then signed by a job seeker confirmed the intention of both parties to enter into an agreement based on the stated terms. The final employment contract should then also contain the same conditions.

“This understanding has been legally codified by virtue of Ministerial Decree No. 46 of 2022 issued under the New Labor Code – Federal Legislative Decree No. 33 of 2021,” she said.

Article 2 of this decree states that employers “should use the approved standard employment contract which corresponds to the job offer when applying for a work permit [from the Ministry of Human Resources and Emiratisation (MOHRE)]“.

While Ministerial Order No. 764 of 2015 was issued before the new Labor Code came into effect this year, Zia said it was still applicable as no decrees had been announced that would repeal or replace it.

“Based on the above-mentioned articles of Ministerial Decree No. 46 and Ministerial Decision 764, it is expressly clarified that the standard employment contract to be concluded between the employer and the employee (after the letter of offer has been signed between them) must correspond to the job offer,” she said.

This means that the essential elements of employment agreed between the parties, such as salary, probationary period, etc., must be clearly stated in both the offer letter and the contract.

It is expressly made clear that the standard employment contract to be concluded between the employer and the employee (after signing the letter of offer between them) must correspond to the job offer.

What if the contract differs from the offer letter?

If you find yourself in a situation where the employment contract contains terms that are not specified in your offer letter, you can raise the issue with your employer.

What if I started working as soon as I received the offer letter?

According to the UAE Labor Law, you should only start working for an employer after the employment contract has been signed and the work permit has been issued by MOHRE. But what if you worked for the company just because of the offer letter?

What can you do as an employee?

Sunil Ambalavelil, a Dubai-based corporate lawyer and legal expert, spoke about how a conflict between an offer letter and an employment contract can negatively impact an employee – whether it’s related to taking on new duties or responsibilities or being transferred to a new location. that have not been agreed.

“If an employee encounters such a situation where he or she has signed an employment contract that differs from the offer letter, he or she is recommended to notify the employer of such changes and give the employer a reasonable period of time to resolve the issue. If the employer refuses to fix the problem, the worker can contact the relevant labor authority of the relevant emirate or free zone,” he said.

He advised workers to ensure that they Keep records of the exchanges that take place between you and your companyregarding the employment contract and read the documents carefully before signing them.

“If an employee encounters such a situation where he or she has signed an employment contract that differs from the offer letter, he or she is recommended to notify the employer of such changes and give the employer a reasonable period of time to resolve the issue. If the employer refuses to rectify the problem, the employee can contact the relevant department of labor in the relevant emirate or free trade zone

What changes to my contract are legally possible?

While your employment contract should generally match your offer letter, there are instances where changes can be made to the contract. For example, the Labor Code and its implementing regulations allow employers to add other benefits to the employee in the contract or to add annexes or conditions to the contract, provided that this is done by mutual agreement and does not violate the law. to Zia.

She listed the following requirements that must be met to ensure that the changes made are within the legal framework:

Ambalavelil also stressed the need to ensure that any changes made do not conflict with the Labor Code and its implementing regulations. He also provided some examples of amended contract terms that would be considered illegal:

• Any condition in the employment contract that states that the costs related to the work visa are to be borne by the employee;

• Any condition that the employee waives his or her benefits or benefits upon termination of employment; and

• Any condition that relieves the employee of the rights provided for in the Labor Code, such as the waiver of holiday entitlements.