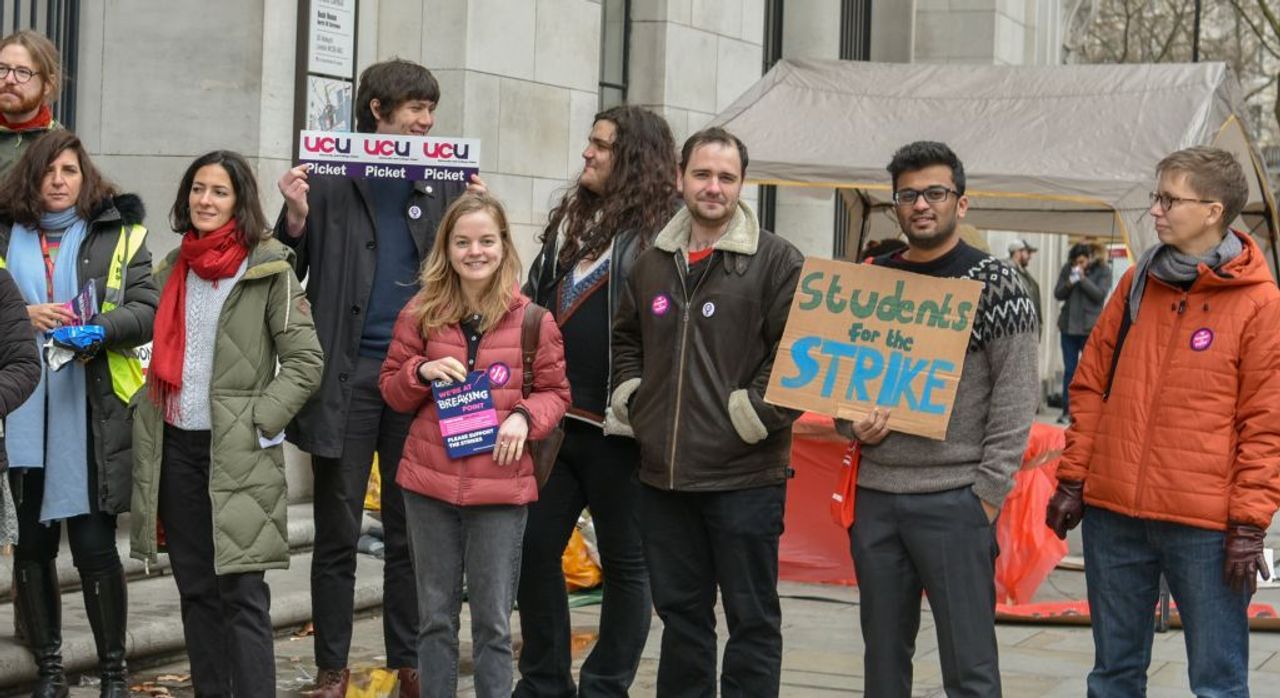 After four weeks of strikes in February and March over a longstanding dispute over pay and conditions in British higher education (HE), University and College Union (UCU) Secretary-General Jo Grady has published a 38-page “new strategy and plan “ published plot”.

With RPI inflation at 9 per cent and the employers’ association only offering most college workers a 2.75 per cent raise, the “new strategy” is to tell UCU members to step down and suffer.

The report is littered with bombastic rhetoric that introduces “a more radical strategy to victory” and insists “this isn’t just one ‘fight’ or even four ‘fights.’ It’s a war.” Grady warns, “If we keep doing the same thing over and over, with even minor tactical adjustments, we’re not going to win.” But the “same thing” that isn’t repeated is any industrial dispute.

After complaining that employers “refuse to give our union anything resembling a win,” Grady gets straight to the point: The union needs to recruit new members and build up its resources, which “means no further action to be taken in the new six-month mandate.”

Unions have spent decades developing strike-breaking tools to quell class struggle, and Grady suggests using every single one of them against college workers. In the introduction, she proposes suspending strike votes by members in 37 universities and suspending disputes until new elections are called in April 2023.

Regarding motions submitted to the April 20 Special Conference on Higher Education, Grady supported those who called for bureaucratic “mapping exercises,” an “online consultation,” and other marketing activities to encourage members to pay dues, but to delay any struggle for better terms. Another motion supported by Grady proposes inviting the university and college employers’ association to arbitration meetings with the government’s Advice, Arbitration and Arbitration Service. The role of ACAS ‘arbitration’ has historically been to work out an agreement favorable to employers, promoted by unions as a ‘reasonable compromise’.

Another technique used to block any struggle is unsuccessful appeals to the Labor Party. As a positive example, Grady cites the fact that wage deals in the FE sector in Wales have been above inflation since 2019, with UCU figures showing an average annual wage increase of 2.75 per cent from August 2018 to August 2021, while annual price increases an average of 2.5 per cent, celebrating how “this was achieved without industrial action – thanks in part to the fact that there is a Labor government in Wales and the UCU office in Wales has developed a strong relationship with policymakers.”

The same right-wing party is currently hiring scabs in a dispute with refuse truck drivers in Coventry, while in England 2.75 per cent has been adopted as the employer benchmark. Employers present this as a concession, as in January they offered just 1.75 per cent, encouraged by their corporatist relationship with the UCU.

Grady advises that UCU will not fight plans to complete the transformation of universities into profit-making centres, writing: “The Tory Government’s plans for higher education also pose a massive potential obstacle to success… National and public The financing landscape is going to get worse, not better, in the foreseeable future.”

The union bureaucracy specializes in portraying sellouts as crucial victories. Grady highlights “achievements” that she hopes to emulate. After pushing the pathetic deal in Wales, she points to an “improved salary offer” won in Northern Ireland this January and “improved offers” accepted at numerous colleges across England. The deal accepted in Northern Ireland included just 2 per cent for 2020 and 2 per cent for 2021, a significant real cut. After Weymouth College in England offered a 2.2 percent pay rise, Grady urged others to follow suit.

Strikes voted for by UCU members during the USS pension dispute were throttled by Grady, as was her widely despised predecessor, Sally Hunt, who resigned after a mass rebellion by faculty members after trying to force a foul deal on them. After employers managed to push through their long-awaited pension cuts in February, followed by just five days of strikes called by the UCU, many workers are finding that no serious struggle can be waged within the organisation.

Grady felt the need to acknowledge the implications of the union’s long history of betrayal. Despite over a decade of real-world pay cuts, “only a small minority of employees eligible to become UCU members are currently UCU members,” she writes. Only around 30 per cent of eligible workers were members of the UCU, far below the average union density in the public sector, which was 51.9 per cent in 2020.

Acknowledging that the vast majority of college workers do not trust the union, Grady wrote that in the 2021 pay and conditions vote, taking into account those who were not union members, “the total number of all branches in the vote was 9% of eligible employees voted for strikes” and that even many of the branches that joined strikes “saw 10% or less of their eligible employees voting for a strike”.

The UCU is finding it particularly difficult to recruit the most exploited workers in the HE, who have seen union-announced agreements as ‘victories’, leaving the system of fixed-term contracts and low wages intact. Grady admitted: “UCU does not have a high density of precarious and underpaid staff. If anything, membership demographics appear to be shifting more towards the higher-paid and more securely employed end of the spectrum over time.”

The inability to recruit poses a problem for the union bureaucracy. In the year ended 31 August 2021, the UCU collected over £22 million (£22,173,779) from members’ ‘contributions and subscriptions’. More than the half of this income (53.8 per cent) was siphoned off by the union bureaucracy in the form of ‘staff wages and expenses’ (£11,948,283). Over £9 million (£9,028,314) went towards union officials’ salaries and wages. Grady coins £140,213 in base salary and pension contributions plus expenses, making her one of the highest earners in the UK.

Grady sees workers outside the union only as a potential source of income to be attacked with “a program of properly planned, adequately resourced, proactive recruitment” while the costly matter of calling strikes is suspended.

Grady’s rival faction in the bureaucracy, the UCU left, politically led by the Socialist Workers Party, offers no real opposition to the undermining of HE workers’ struggles. While calling the new plan a “surrender document”, the UCU leftists went on to bolster a discredited UCU, writing: “Reading this document you would not have guessed that the union had just recorded an overwhelming majority in favor of strike action and ASOS [action short of a strike].”

Before Grady released her new plan, and after professing to oppose the previous strategy of isolated regional strikes, the UCU left suggested turnout might be low advantageousas: “Beating a minority of institutions can work to our advantage by creating divisions among employers”.

According to Grady released the plan, a statement from the UCU left went to extraordinary lengths to justify why members did not vote in strike elections, stating: “Members do not vote for a variety of reasons, as anyone who engages in Get the Vote Out ( GTVO ) campaign, from lost papers to moves and agreed vacations.”

At their Four Fights conference on April 20, UCU officials voted against a motion calling for a “British escalation of the ongoing strike to an indefinite strike”. Instead, they supported another 10 days of strikes “at the end of May”, ie at the end of the term. The UCU has not yet given a date for any action.

As a harmless alternative to industrial action, Grady’s faction is pushing for an exam boycott “in the coming months.” For all the ranting from the UCU left, they only add the stipulation that a tagging boycott should be funded by “members in non-striking industries” who “would be more than willing to contribute to sponsoring colleagues”.

Members not participating in a tagging boycott should be encouraged to donate a day’s wages each week to the union, whose funds would be secured! Her other suggestions are “for a vote over the summer” (when everyone is on vacation) which “could see us all ready to take over employers right at the start of the fall semester.”

No faction will emerge from the UCU to transform it into a combat organization. The only way to stave off the relentless assault on wages, pensions and conditions in higher education is for workers to form grassroots committees independent of the UCU. Such groups need to join their struggles with other workers and students in the higher education and training sectors.

Get news and information on the fight against the unsafe reopening of schools.

Jason Bailey: It’s time to cancel student debt and get back to education as a public good