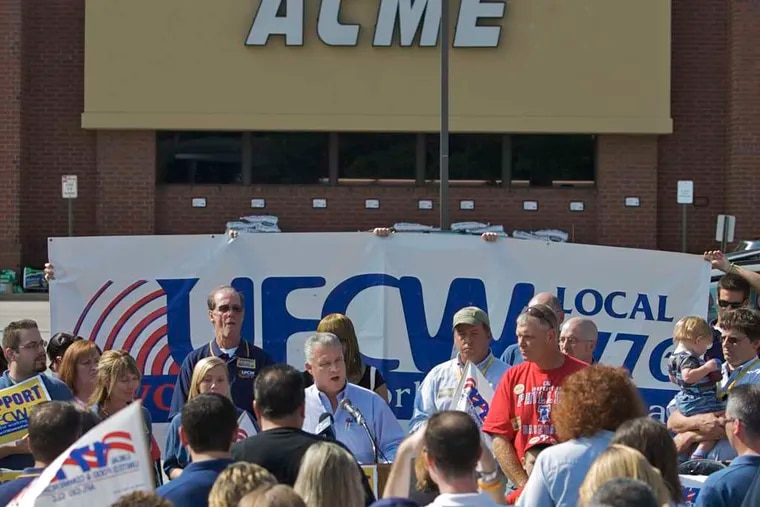 Where’s the food workers’ cut in the sale of Acme properties?

If the Federal Trade Commission approves the $20 billion sale of Acme Markets owner Albertsons to Kroger as planned next month, the private equity investors who control this conglomeration of US grocery and drugstore chains will be nine times as big have squeezed out a lot of profit as they have invested since 2006.

That’s about triple what you and I and our retirement savings (if any) would have gotten if we’d invested our money in the S&P 500 stock index over the same period. And it’s much more so as food worker wages have risen, even with pandemic-era gains caused by labor shortages and hiring competition from Amazon and other warehousing and delivery companies.

These investors, led by private equity giant Cerberus Capital Management, amassed the 2,300 businesses that now make up Albertsons in a series of complex transactions. In addition to Acme, these include Safeway, Jewel-Osco, Vons, Shaw, and more than a dozen other brands.

Cerberus doesn’t always hit the bull’s eye: The 30-year-old company lost $2 billion in Chrysler’s 2009 bankruptcy. For the grocery bet, it spread its risk by teaming up with four major real estate investors, including Lubert-Adler, the Philadelphia-based real estate partnership, whose clients include the Pennsylvania Public Pension Plans.

After years of merging, consolidating, and modernizing the businesses, these pros took Albertsons public in a stock offering last year, but still control over 50% of the shares and will be the biggest beneficiaries of the Kroger deal.

For example, Lubert-Adler owns about 10.9% of Albertsons and will turn its $300 million investment into $2.7 billion if all goes according to plan. (With the government still reviewing the sale, founders Ira Lubert and Dean Adler didn’t want to speak when I called last week.)

The deal also includes a big kiss goodbye: After Albertsons used its pandemic-era profits to pay off many old debts — and reduced its debt-to-revenues ratio from nearly 5 to just 1 — the company has agreed to pay declared the private equity fund and other current investors an additional $4 billion – $6.85 per share – as a “special dividend” on November 7th.

That’s more than two years of profits for the company, meaning Albertsons has to borrow at today’s rapidly rising interest rates, pushing the debt ratio to as high as 2.5, still well below pre-pandemic levels; or use proceeds from asset sales the government is expected to require as a condition of the deal in Midwestern and Western states where Kroger and Albertsons businesses compete.

The payout has drawn critics who belittle store improvements, new technology and other investments by private equity owners, and see investors like Cerberus and Lubert-Adler as scavengers who are squeezing target company employees and weakening the firms they buy and sell , when they buy and sell them they are done wringing out profits and payouts.

“This will severely weaken the indebted grocery chain. Regulators need to step in and stop this looting of the company,” wrote Eileen Appelbaum, the Penn and Temple-educated economist and author of Private equity at workand co-director of the Center for Economic and Policy Research, a think tank in Washington, DC

“It’s a really big concern for the unions: If you pull $4 billion out of these companies, what financial position is this company going to be in? We’ve had some discussions about this, our international union is hiring financial professionals and law firms, and I think they’re going to try to stop or block that payment,” says Wendell Young IV, president of the Philadelphia-based United Food and Commercial Workers Local 1776 represents workers at Acme and 100 other companies, primarily in Pennsylvania.

The union and other 34-state residents of both chains fear the cost of paying back Cerberus, Lubert-Adler and the other private investors “will show up at the negotiating table for lower wages and benefits,” Young added. Merger-related debt is as common as mergers in the grocery chain.

Young notes that his union had a series of “nasty fights with Acme” even before the former owner, Sam Skaggs’ American Stores, was bought by Albertsons in 1999.

union leaders talk hard; it is part of the negotiations. Given Kroger and Albertson’s long history as unionized companies – now competing with non-union grocers from Walmart to Wegmans – there is reason to believe that the enlarged Kroger and its unions will come to terms with a larger, more efficient competitor, that provides pensions and medical care Plans that distinguish the chains as unionized employers are more likely to go ahead.

When Skaggs’ company hired Wall Street bankers and threatened to sell Acme stores, the union hired its own investment bank and attempted to buy them (as it did earlier A&P stores to shut down the former SuperFresh chain establish).

In the late 2000s, when Albertsons merged with the SuperValu group of stores and managers were demanding cuts, the union ran a “walk and work” picket campaign to pressure the company to continue benefits without breaking its contract.

Young said similar tactics could pressure Kroger into committing to funding wages, benefits and store needs before paying off investors — and that the pro-labor Biden administration or even state antitrust authorities could help convince employers change their deal to be more worker-friendly.

But it would be unusual for the FTC, the Securities and Exchange Commission, or any other federal agency to step in and stop the Albertsons from paying investors a fat dividend, says Charles Elson, a corporate governance consultant based in Newark, Delaware.

That’s because Kroger, the buyer, has agreed to accept Albertsons even without the $4 billion, he added. “If Kroger thought taking the money out was going to ruin Albertsons, they wouldn’t buy it,” Elson added. “Kroger needs to produce results for his own investors.”

12 Crucial Steps When You Have Nothing Saved For Retirement