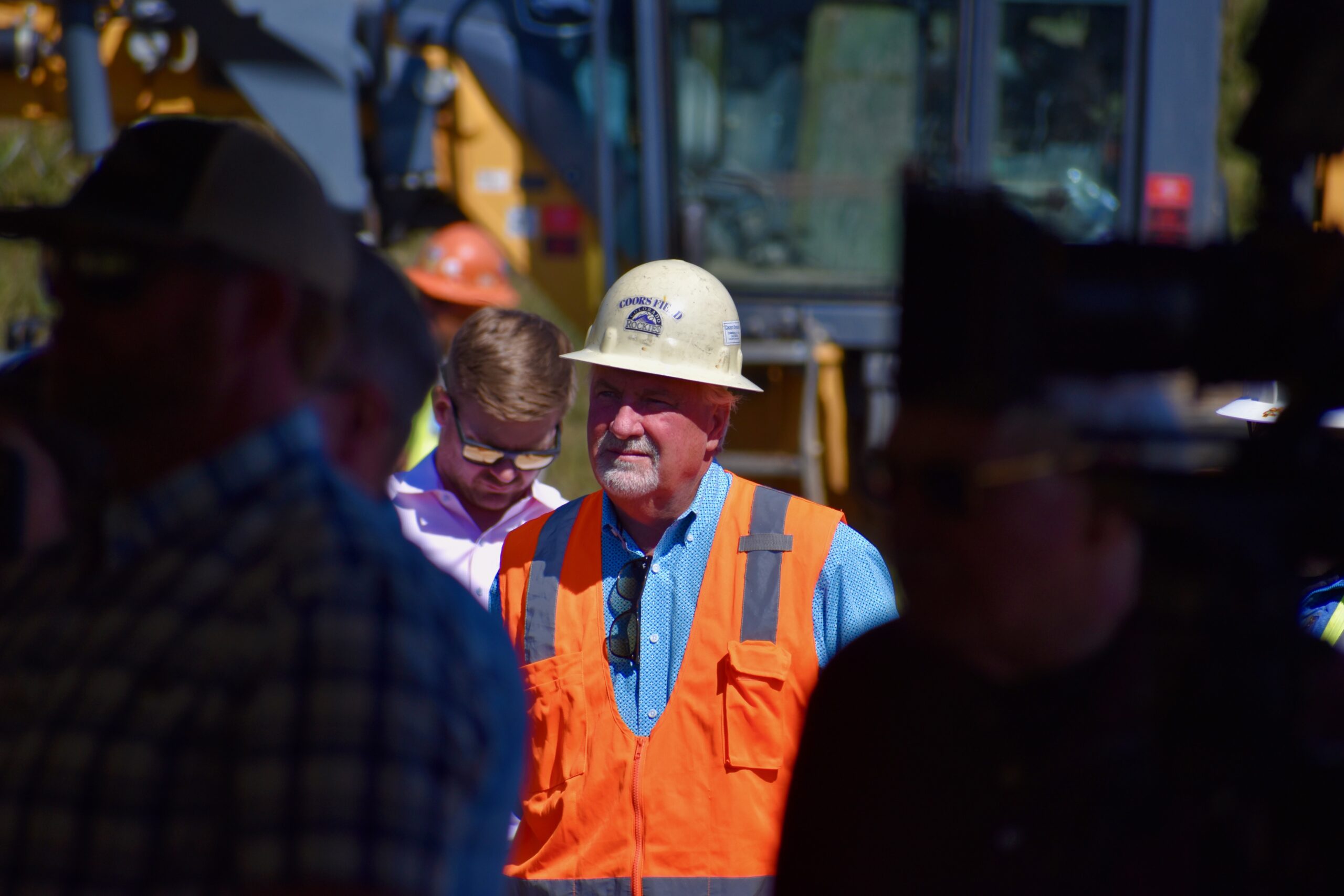 When Colorado’s US Senate candidates entered the campaign trail on the Western Slope last month, their paths crossed briefly at a dam on the Colorado River in the highlands east of Granby. Incumbent Senator Michael Bennet, a Democrat, and Joe O’Dea, his Republican challenger, both attended the groundbreaking for the Colorado River Connectivity Project, a mile-long diversion aimed at restoring a riparian ecosystem damaged by the construction of the Windy Gap Reservoir in the 1980s.

While Bennet’s appearance came naturally after he helped secure federal funding for the project, an environmentalist-backed plan to spend up to $14 million in taxpayer dollars to protect sensitive aquatic habitats for giant stoneflies and speckled bullheads seemed being an unlikely candidate for the approval of a staunch fiscal conservative.

However, O’Dea hailed the project as a “great example of collaboration,” a “win-win situation” that is “good for the river and the people who recover there.”

His company, Denver-based Concrete Express Inc., is the general contractor for the restoration project.

GET THE TOMORROW HEADLINES IN YOUR INBOX

As a construction company, CEI receives the majority of its business from city and county governments, which are funded primarily by a mix of local, state and federal dollars. After more than 30 years in business, managing these publicly funded projects has made O’Dea a wealthy man â€” and now that wealth is helping to fuel a Senate campaign whose Priority #1says O’Dea, cutting government spending.

The dissonance has not gone unnoticed.

“I heard he hates federal spending, aside from the $14 million that built this thing,” Bennet said of O’Dea to a reporter after the groundbreaking at Windy Gap.

“Such reasonable projects are worthwhile,” wrote Kohli. â€œBy contrast, the $1.9 trillion boondoggle of Michael Bennet and Joe Biden has fueled the inflationary crisis that is dragging down the economy. Reckless and wasteful federal spending is why working Americans are struggling to afford their grocery and electric bills.â€

If elected to the Senate, O’Dea plans to “either divest his assets or place them in a blind trust to ensure there are no conflicts,” Kohli said.

When asked about CEI’s government contracts in a FOX31 interview Earlier this month, the first-time candidate tried to distinguish between other types of federal spending and “dollars being invested in assets here in Colorado.”

“These are the customers we have,” he said. â€œWe have been fair to all of them. We have done great work. I have a great company and I’m not afraid to talk about the money we got from the government.”

CEIs work on several segments of the Peaks to Plains TrailPart of a long-term plan for a continuous series of bike paths between Denver and the Continental Divide, typifies its civil infrastructure work: a project overseen by local governments, supplemented by state and federal funding, and occasional private grants.

Since 2013, Jefferson and Clear Creek counties have awarded CEI contracts totaling at least $48 million across multiple segments and phases of construction, county records show. Significant funding for the Peaks to Plains project comes from Great Outdoors Colorado, a state initiative funded by lottery proceeds, and the Federal Transportation Alternatives Program. TAP funds are a common target by conservative critics of federal spending, with many congressional Republicans supporting scrapping the program altogether.

A Newsline review of publicly available records found more than $400 million in government contracts awarded to CEI by state and local government agencies, most of it within the last 15 years. The combined number likely represents only a portion of the publicly funded work the company has accomplished since its inception in 1986.

Projects, largely the result of competitive bidding, range from minor sidewalk or drainage improvements to a multi-year, $40 million contract from the Colorado Department of Transportation to reconstruct a section of US 285 in southwest Denver.

It was an extremely lucrative business for the founder and CEO of CEI. In a personal finance disclosure filed earlier this year, O’Dea estimated his net worth at between $17 million and $80 million, with CEI stocks worth between $5 million and $25 million being his single-biggest net worth.

According to the Federal Election Commission, he has invested a total of more than $1.6 million of that fortune in his Senate campaign. O’Dea’s early self-funding was key to his strategy in securing the GOP nomination, which allowed him to qualify for the June primary through an expensive signature drive rather than a state party convention dominated by far-right conspiracy theorists.

Though CEI’s record isn’t pristine — it has faced penalties for security breaches, including a 2007 roof collapse in Greenwood Village, which injured 13 workers – his government clients were generally satisfied with his work. The company’s performance has been rated as “standard” or “above standard” on four CDOT-managed projects for which it has received a rating.

In an uphill battle to oust Bennet in an increasingly Democratic state, O’Dea has portrayed himself as a more dovish man who advocates limited abortion rights in early pregnancy and a bipartisan $550 billion infrastructure spending package approved last year Congress was passed.

But he was a relentless critic of what he “ruthlessFederal spending under President Joe Biden, including the American Rescue Plan, a $1.9 trillion stimulus package passed in March 2021, and the Inflation Reduction Act, a health care and clean energy package passed this year . O’Dea he said last bill that he “didn’t see anything in it that I liked”.

“You have to stop spending,” he told an interviewer earlier this month. “We need to cut spending. We have to slow that down.â€

“Priority one,” states O’Dea’s website, is “to reduce Biden-era spending to reduce inflation and the deficit.”

“I was asked to go to a lunch”

O’Dea’s work lobbying for government contracts brought him into close contact with elected officials, Republicans and Democrats alike – including Bennet, to whom O’Dea made a $500 campaign contribution in 2010.

At an event hosted by a Republican group in Denver ahead of the June primary, O’Dea explained that he made the donation while he was president of the Colorado Contractors Association, a trade group dedicated to the civil construction industry.

“I’ve been asked to go to some lunches (and) made some contributions,” O’Dea said.

His contribution to Bennet’s first re-election campaign was among the more than $36,000 in donations O’Dea and his wife have made to Colorado political candidates since 2005, according to data from the FEC and the Colorado Office of the Secretary of State. His main rival, far-right MP Ron Hanks, called his opponent “Pay to play O’Dea.â€

Funding for infrastructure, particularly for projects focused on road and highway upgrades, has long been a concern for Republicans in the Colorado statehouse. Led by O’Dea, the CCA lobbied to support a Invoice 2009the Funding Advancements for Surface Transportation and Economic Recovery â€” or FASTER â€” Act, which increased vehicle registration and rental fees to generate an additional $200 million annually for transportation projects.

In a state with severe fiscal restraints like the taxpayer’s Bill of Rights, budget struggles have often pitted infrastructure investments against spending on social programs. In 2018, as conservative groups backed $3.5 billion in debt-funded transportation spending via the unsuccessful Fix Our Damn Streets ballot measure, progressive groups evolved slammed the initiative as a plan to “set up our schools and hospitals and child care as security”.

O’Dea has also continued to advocate significant infrastructure investment while taking a hard line against social spending Health Care Grants and Biden’s student debt relief plan, to quarrel that such measures fuel inflation and amount to an “embracing of socialism by Washington’s political elites.” He has slammed the pandemic-era relief effort for “making it too easy not to work,” stressing the need to “get (workers) off the couch” and has also recommended Cuts in longstanding entitlement programs like Social Security and Medicare.

“To manage the debt, you have to grab everything,” he told Denver radio host Ross Kaminsky in June. “We need to make (the government) small and efficient so that it can do the things we need it to do, like fund our police force, fund our military, fund our infrastructure.”

While O’Dea delivers his small government message to Colorado voters, his ads and campaign materials pay little attention to the specific nature of CEI’s business, while his supporters laud him as “homemade” Entrepreneur. And in another radio interview Earlier this year, the candidate, who has reaped the benefits of hundreds of millions in government money, offered a different take on his success when he vowed to “start hacking back at this government.”

“We don’t need all that help,” O’Dea said. “My business was at its best when we had the least help from our government.”

Scottish fintech Guiide has raised a new investment of around £200,000 and welcomes three new additions to the team